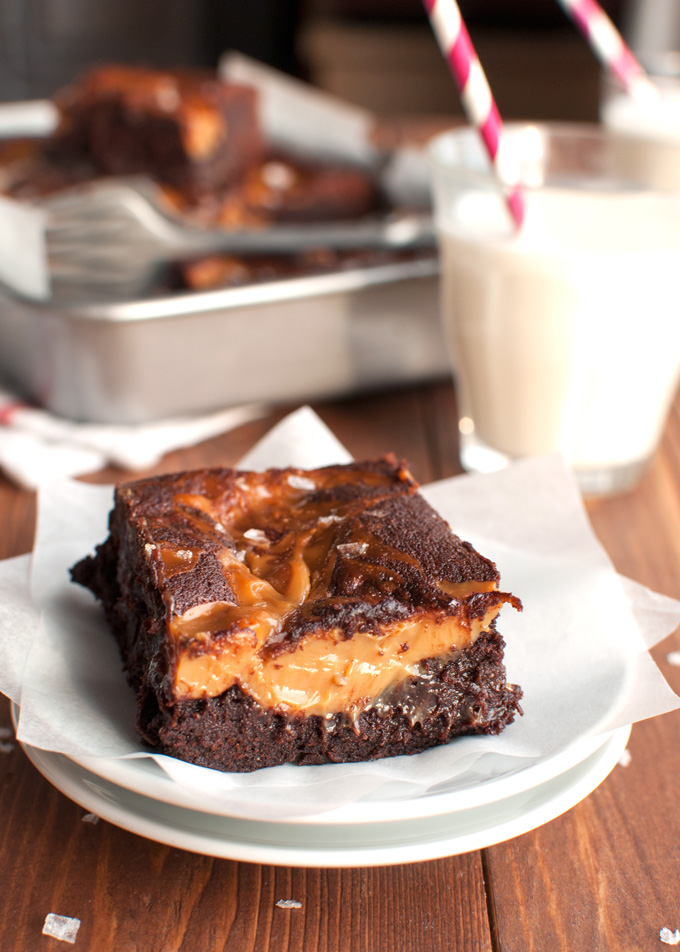 You guys! I’ve missed you! Oh, and my toe is doing fine, thanks for asking…

After the chaos of last week I’ve FINALLY found time to tell you about those amazing salted dulce de leche brownies. I’m sure all of you would loooove to know what kept me from sharing it with you for so long and, frankly, I wish I had some amazing excuse or story to tell you. Like: I flew ar0und the world in a hot air balloon. Or: I was kidnapped by monkeys who wanted to teach me swear words in Spanish. But no… Last week was just full of difficult work related assignments and, I’m afraid to admit, hours and hours spent in Thesis Land. Again. Pff, will I ever finish the damn thing?

I doubt it. Although I did manage to write 11.782 words in the last week. Which is definitely a step forward!

So, to celebrate, let’s talk about these brownies. Sure, I wish I had some leftover brownies to celebrate instead, but as there’s not a single crumb of these babies left, writing about them will just have to do…

And yes, they may remind you of these brownies I made last year! 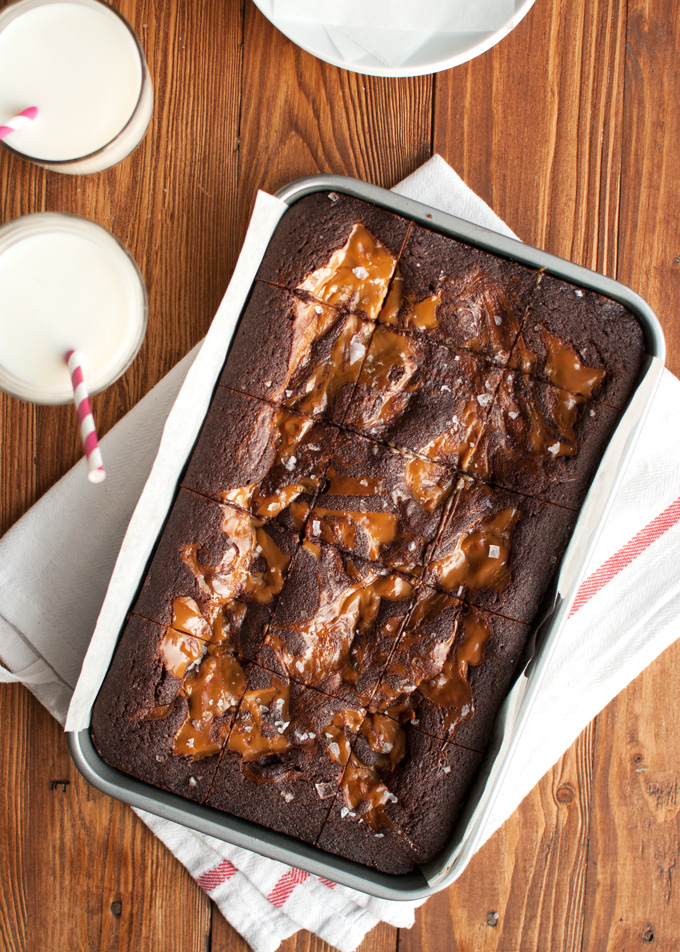 Oh wait, the method is similar though…

As with my previous recipe, you make these brownies by first beating together softened butter and sugar. I know: the cake method… Dreaded by fudgy-brownie-enthousiast all over the world. But just because this recipe uses the cake-method does not mean the brownies will be cakey. Not at all! The creaming method, as opposed to melting the butter with the sugar before adding the other ingredients, results in a thicker, sturdier brownie batter, which prevents the dulce de leche topping from sinking to the bottom of the pan as the brownies bake. I tried making these brownies by first melting the butter and sugar together, but it just wasn’t the same; the dulce de leche sank to the bottom and the top of the brownies came out rock hard…

So if you’re a fudgy-brownie-lover just ignore your brownie-making instincts for a while.

And seriously, does this brownie look cakey to you? I. Don’t. Think so. 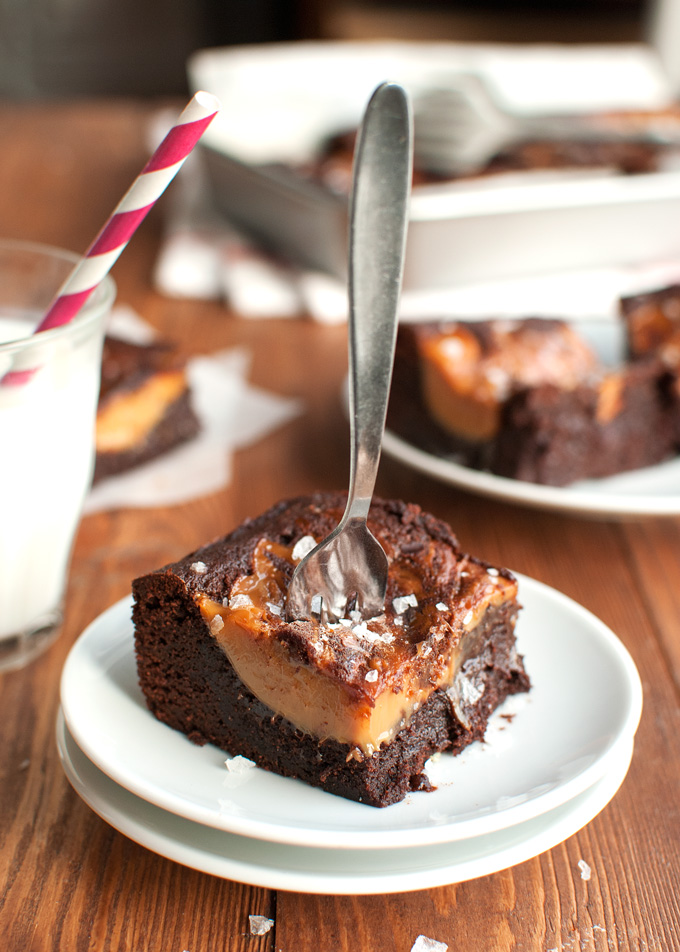 After you’ve creamed butter and sugar together, simply add eggs, flour, cocoa powder and some other things, like salt and vanilla. Mix, mix, mix, plop on some dulce de leche and bake!

But wait, how are these brownies different from last year’s brownies? Well….

Last year’s brownies were made with a combination of granulated sugar and golden syrup. But as it turns out, golden syrup is not widely available all over the world. Which is a damn shame if you ask me, because it’s awesome.

Today’s brownies are instead made with a combination of granulated sugar, light brown sugar and corn syrup (or glucose). The brown sugar not only adds moisture but also intensifies the chocolate flavor by giving it a hint of butterscotch (thus making up for the lack of golden syrup in these babies), while the glucose – a liquid sweetener – makes these brownies super fudgy!

You see? Just worked around the golden syrup this time… 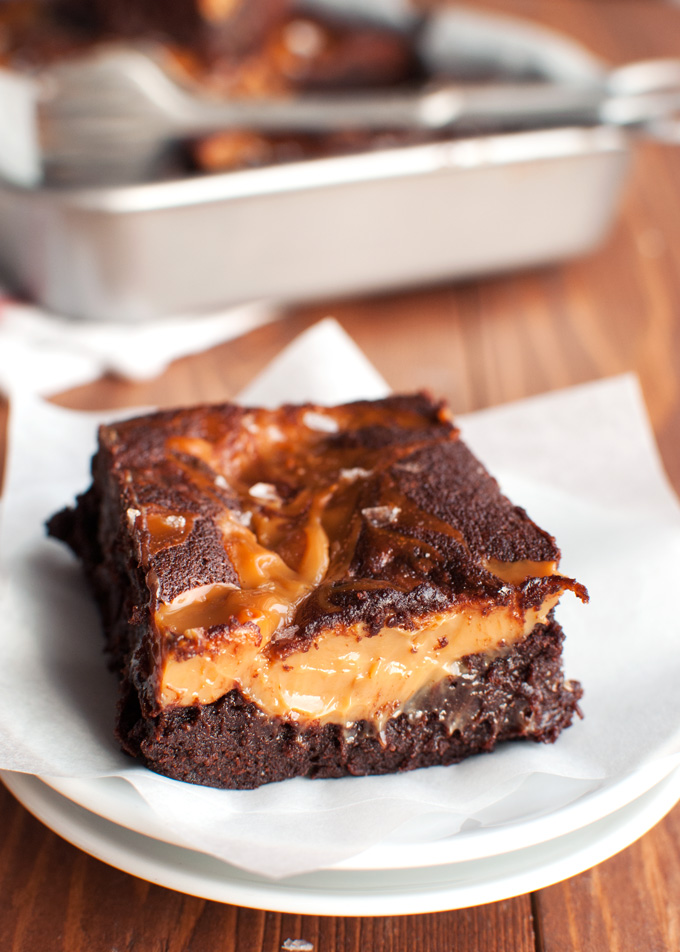 I always use homemade dulce de leche, because it’s super easy to make and the flavor is awesome!

I always use the closed can method, but you can use any kind of method you like. For inspiration, check out my series on ‘Making Dulce de Leche‘.

Anyway, to make dulce de leche in the can, just take a can of sweetened, condensed milk, remove the label and place the can in a large pan. Fill the pan with water, making sure the water level rises about two inches above the top of the can, place over high heat and simmer for two to three hours. For this recipe, I advise you to cook the can no longer than two hours, otherwise the dulce de leche may get too dark in the oven.

Once cooked, remove the can from the water with a pair of tongs (spelled it right this time!) and allow it to cool to room temperature before opening it. That’s it!

Oh, and you might want to make two cans. Dulce de leche is pretty hard to resist… Especially paired with fudgy brownies and sea salt! 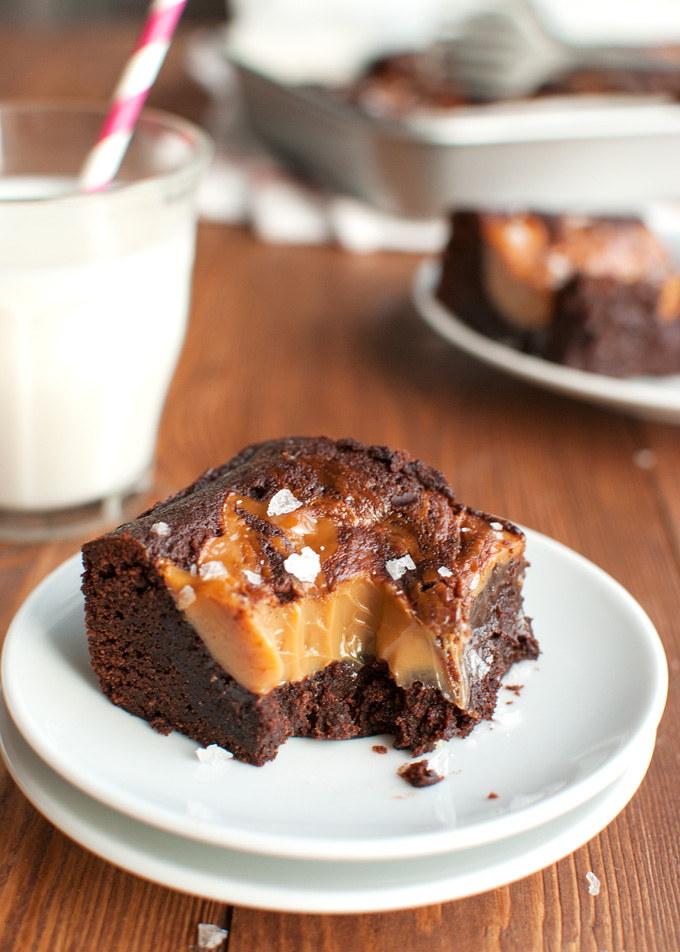 So there you have it: super fudgy brownies with an intense chocolate flavor topped with generous dollops of thick, creamy dulce de leche and a sprinkle of sea salt… I’m gonna make another batch!

After all, I’ll need some serious fuel if I’m gonna try to write another 11.782 words for my thesis this week.

« Just Having an Off Day…
Things I Made a Year Ago » 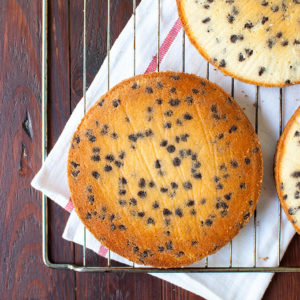