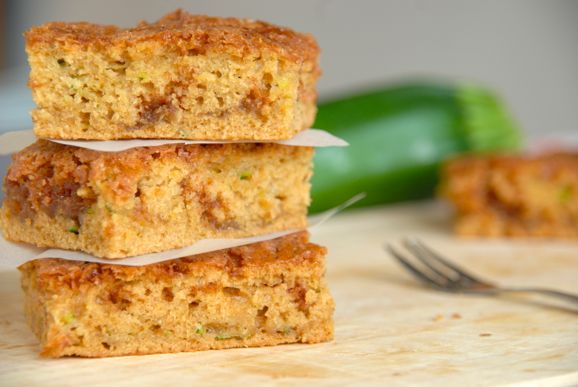 I first read about this recipe about a month ago, on one of my favorite food blogs: Pinch of Yum. Sounds promising, right? That’s what I thought!

Pinch of Yum is run by not one but two bloggers! First there’s Lindsay, who’s does all the cooking, writing and photography around those parts. Then there’s Bjork, her husband, who’s in charge of the tech support and income stuff.

Wouldn’t that be great? Having a husband who could help you with technical blog stuff? Not that the Rocking Rebel is useless when it comes to computers, but he’s more of a… well he’s called ‘The Rocking Rebel’ for a reason! If he would have been amazing with computers, I would have come up with a different nickname… Like ‘the Computer Whisperer’, or something…

Anyway, I really love Lindsay’s recipes! I’m in love with her Whole Wheat Roasted Veggie Lasagna and her Red Curry Lentils are amazing! I can actually really relate to her style of cooking, as she tries to keep her dishes practical, interesting and delicious. And aren’t all my recipes practical (or at least easy) and delicious? And hopefully a bit interesting, too?

When it comes to sweet recipes, I was magically drawn to this cake as soon as Lindsay posted about it. It just looks so delicious!

I mean, just look at it! The sticky middle layer of sugar and cinnamon… The tiny bits of zucchini in the cake itself… The crunchy top layer of sugary cinnamoney goodness…

To make this cake, just start by whisking together some brown sugar, sunflower oil and half an egg.

If you don’t like using half eggs but do like eating a lot of cake, just double the recipe, but keep in mind that you’ll then have enough to serve twenty people… Or one very, very hungry person! 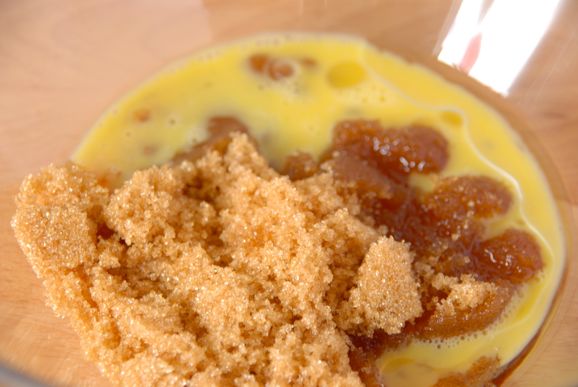 Once your batter is nice and smooth, whisk in some buttermilk. You could obviously do this as you are whisking the sugar, egg and oil together, but I was using makeshift buttermilk – aka: a mixture of milk and vinegar – and it still needed some time on the countertop to actually become buttermilk… 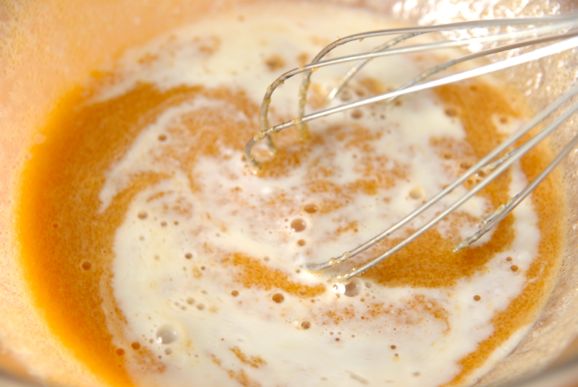 Once you’ve added the buttermilk, whisk in some salt, baking soda and vanilla.

I used vanilla paste, because I ran out of extract, but feel free to use whatever you have on hand, bearing in mind that 1 teaspoon of extract equals 1 teaspoon of paste. 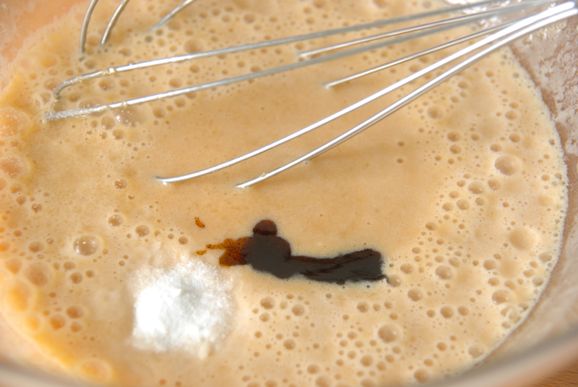 Next, add the flour and whisk to a smooth batter. 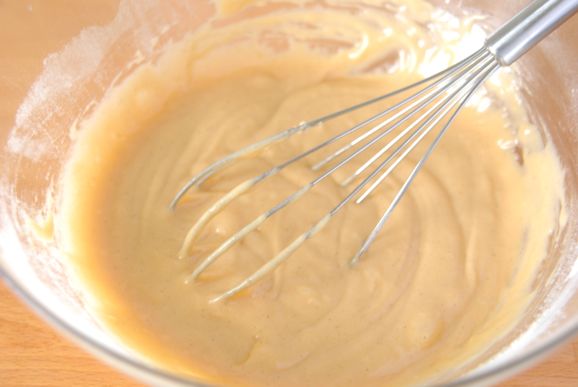 Don’t you just love adding vegetables to your cake batter? It just so funny to use something as wholesome and healthy as zucchini to make something as sugary and sweet as cake! 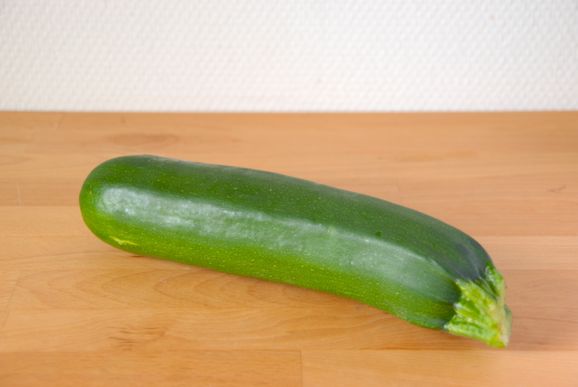 Grate up about half the zucchini, save the other half for pasta sauce and throw the grated bits into the batter along with some orange juice… 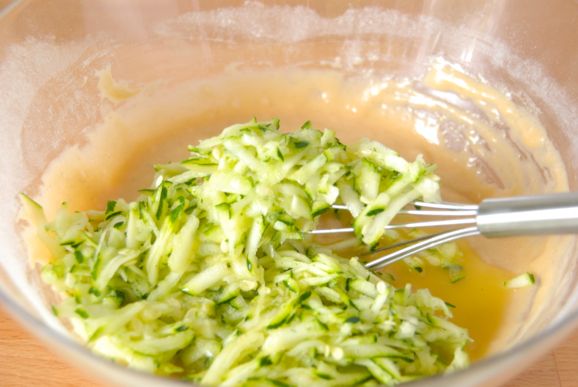 … then whisk so the batter becomes gorgeous, slightly green and perfect! 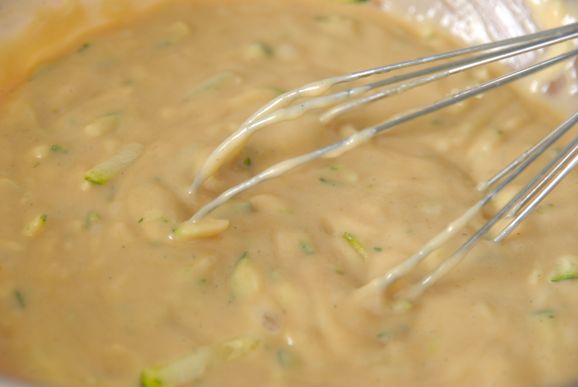 On with the topping slash filling, which both runs through the cake and forms a nice, crusty top layer.

Combine softened butter, sugar and cinnamon in a little bowl… 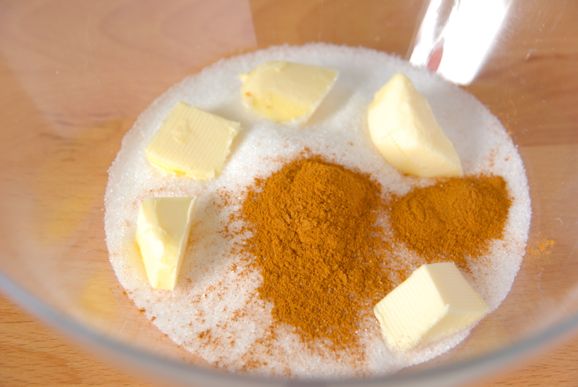 … then rub the mixture between your fingers until it kinda looks like soft brown sugar. 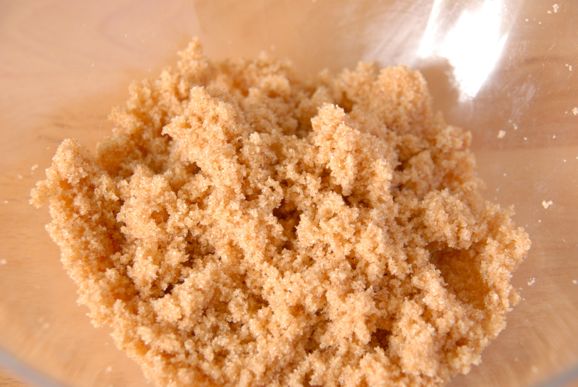 Assemble the cake by pouring half the batter in a brownie pan that has been lined with baking parchment and sprinkle half of the cinnamon sugar on top. 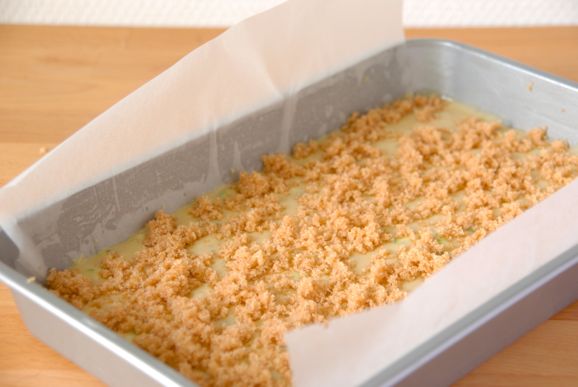 Then carefully pour the remaining batter on top. That sounds pretty easy, right? Don’t be fooled, though. This is the most difficult part of the cake-making-process!

At least for me it was…

I had quite some trouble spreading the remaining batter over the cinnamon sugar layer without messing it up. Maybe if I’d had a little more batter or had used a smaller pan, it wouldn’t have been so difficult and I would have ended up with a beautiful layer of cinnamoney goodness in my cake instead of more of a cinnamon swirl cake…

Something to keep in mind for next time!

But whatever you do, don’t leave the middle cinnamon layer out! Like Lindsay says: it makes you a weirdo… 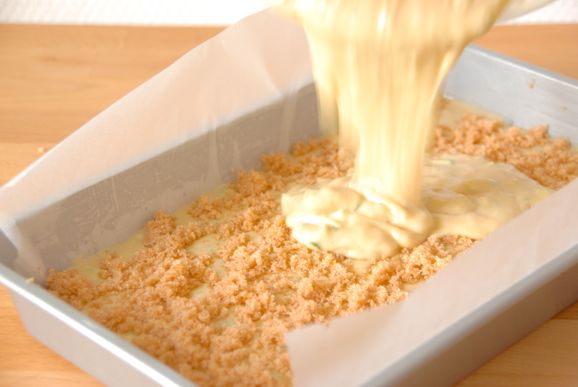 Besides, the cake still tasted delicious!

Just look at all those bits of zucchini and those gorgeous cinnamon swirls! 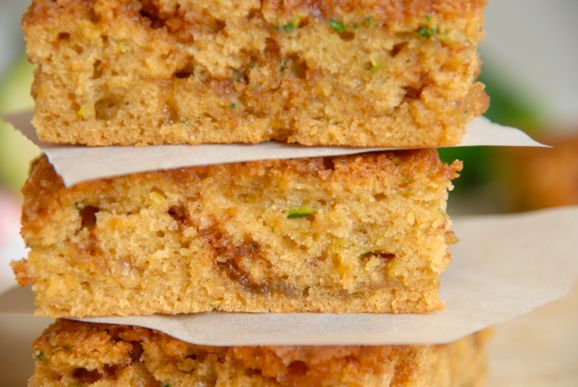 My three-year-old nephew loved it! But I’ll admit that neither me nor his mom ever mentioned this cake had zucchini in it… 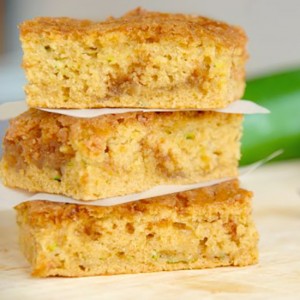 Print
Prep time
10 mins
Cook time
40 mins
Total time
50 mins
Author: Adapted from Pinch of Yum
Ingredients
For the cake:
For the cinnamon sugar layers:
Instructions
Notes
If you don't have any buttermilk, just mix 2 teaspoons of white vinegar with 110ml (or ½ cup - 2 teaspoons) of milk. Leave to sit on the countertop for 5 minutes before using.
3.2.1284 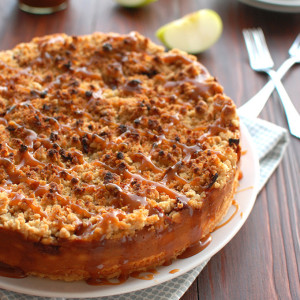