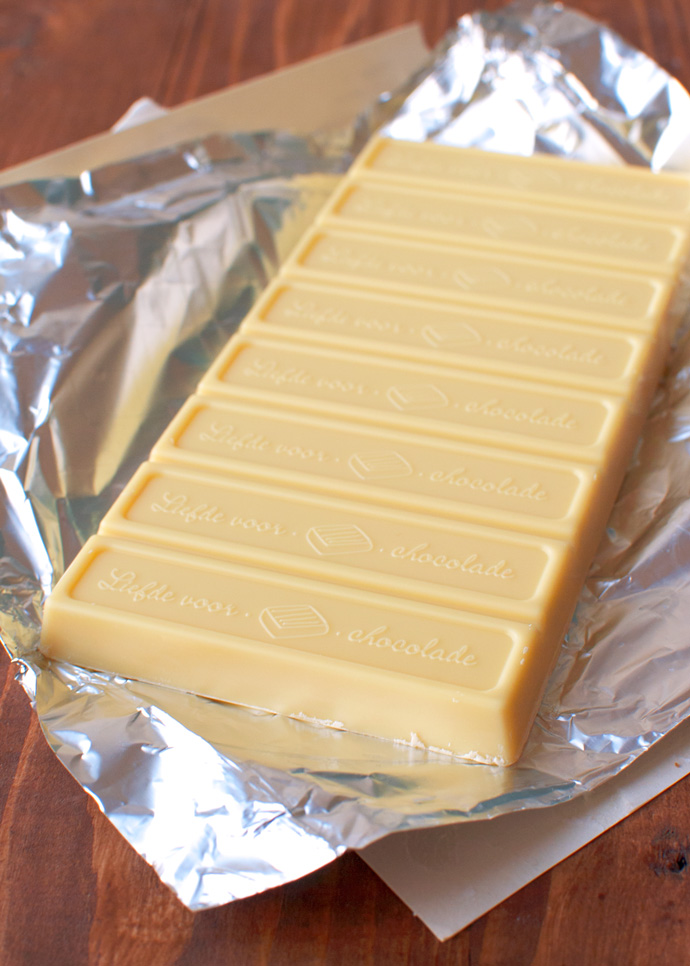 Sounds intriguing, right? That’s what I thought when one of my readers sent me a link to another food blog – Veggie Chef – a few weeks ago. At the time, I was halfway through my ‘Making Dulce de Leche‘ series, Maillarding away in my kitchen, testing out different ways to caramelize sweetened, condensed milk in order to make dulce de leche.

You still remember the Maillaird reaction, right? It’s basically a form of caramelization that occurs at lower temperatures when sugars are combined with protein. When you’re making dulce de leche, you’re not actually caramelizing: the sweetened, condensed milk turns golden brown, because of the Maillaird reaction.

The same goes for white chocolate.

Still with me? If you want to know more about this whole Maillard-thing, just check out my post on 10-Minute Dulce de Leche Cheat Sauce again. I explain everything there, but just to clarify:

The results are the same: a deep golden color and a complex, sweet flavor! 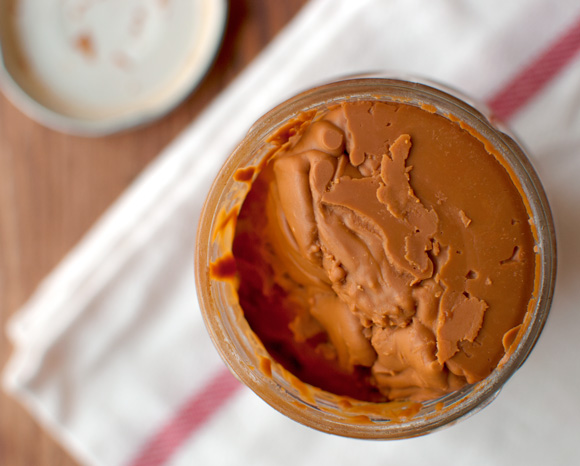 The guy behind Veggie Chef, Eddie Shepherd (who, by the way, happens to be an award winning chef) explains about a different method. Instead of baking white chocolate in the oven, he vacuum packs the chocolate in a plastic bag and cooks it in a hot water bath for a couple of hours.

Great idea, but where was I to get a vacuum-sealer-thing…

After all, I have gotten really good at throwing cans into pans with boiling water. And isn’t a jar just a can made of glass?

It worked perfectly! Well, almost perfectly… After about 3 hours in the simmering water, the chocolate turned a beautiful golden brown, but it thickened considerably. As in: even when warm, the caramelized chocolate was solid… According to various blog posts on caramelized white chocolate, it was supposed to melt completely at this stage. Sure, it should still firm up once it cooled down, but the hot chocolate should melt. 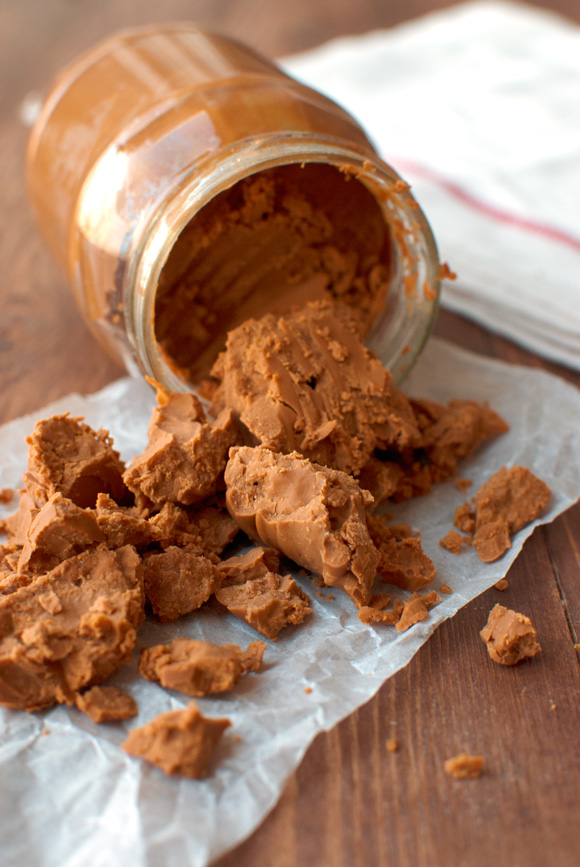 Not that it matters much, though! The chocolate may not have turned into a pool of molten gold, it was utterly delicious! Caramelized white chocolate still tastes like white chocolate, but with a huge caramel kick to it! Seriously guys, this stuff packs a punch! It’s super intense! It’s very sweet, like caramel and dulce de leche, but it has gorgeous deep caramel, milk and even toasted coffee tones to it.

Which happens to be about $12 a pound…

Sooooo, I used a regular supermarket brand instead. A brand that I really love, which is not only a lot cheaper, but – as it turned out – also contains a lot less cocoa butter. Because most supermarket chocolates contain less cocoa butter (most contain the minimum of 20%), these types of chocolate tend to dry out and crumble as they caramelize. I tried melting the caramelized chocolate crumbles in the bowl of a double boiler, but this didn’t really work. The chocolate did seem to loosen up a bit, but it didn’t completely melt. At best, it became spreadable.

However, the flavors were there. And they were amazing! 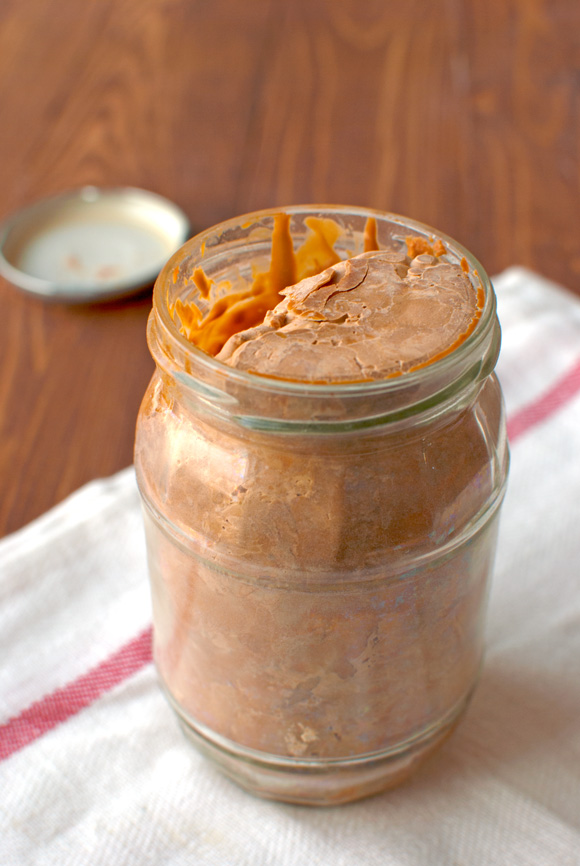 Having said that, not every kind of ‘chocolate’ can be used for this. For example, I wouldn’t try this with chocolate that has a cocoa butter content lower than 20% or with white chocolate chips.

Most chocolate chips are bake-stable, which means that, when you use them for things like chocolate chip cookies, the chocolate won’t flow into the cookie dough as you bake the cookies in the oven. The chips do melt, but if left to cool undisturbed (aka: without someone poking them or biting down on them) they’ll still look the same as chips that haven’t been in the oven.

Bars or blocks of chocolate may be a little more difficult to work with, but this is definitely a recipe that calls for bars! Even if it is a supermarket brand…

However, if you want to make caramelized white chocolate in the oven or if you (for some reason or recipe) want the finished product to be completely meltable, I would advise you to pay a little more and get some high-quality white chocolate with a cocoa butter content of at least 30%! Even if it sets you back $12! 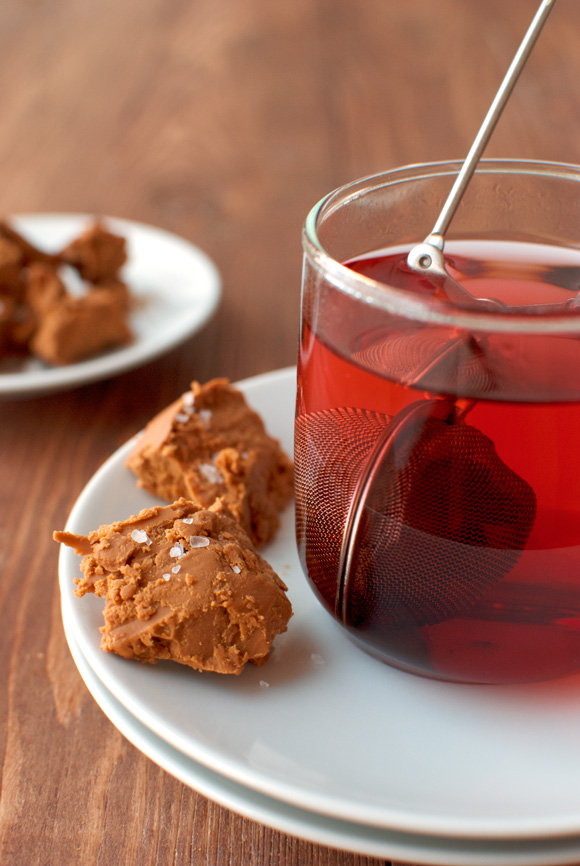 Personally, I don’t think I’m going to bother with the Valrhona. I might try it out sometime, if I happen to stumble upon some Valrhona Ivoire someday, but I really liked working with this particular supermarket brand.

Besides, I kind of liked the caramelized chocolate’s crumbly texture. It wasn’t unpleasantly dry, just more like untempered chocolate: soft and chewy. Sprinkled with a little sea salt, I think those chunks don’t look too bad next to a cup of tea or coffee!

Print
Prep time
10 mins
Cook time
3 hours
Total time
3 hours 10 mins
Caramelized white chocolate has a gorgeous golden color and tastes like white chocolate and caramel, with just a hint of freshly toasted coffee beans. Enjoy it on its own, with a few flecks of sea salt, or use it in desserts!
Author: The Tough Cookie
Ingredients
Instructions
Notes
If you want to store the chocolate, allow the jar to cool to room temperature, then store it in your pantry. White streaks of cocoa butter will appear on the surface of the chocolate, but don't worry about that. If you want to serve the chocolate on its own, just place the jar in a warm water bath (such as a pan filled with hot water) until the streaks have melted away. At any rate, it's much easier to get the chocolate out of the jar if it's slightly warm.
3.2.1275 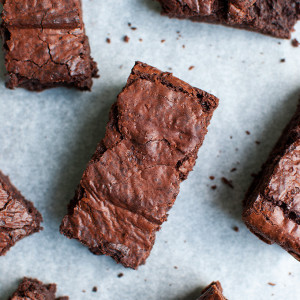 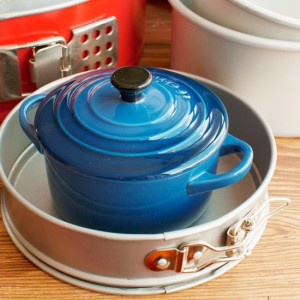 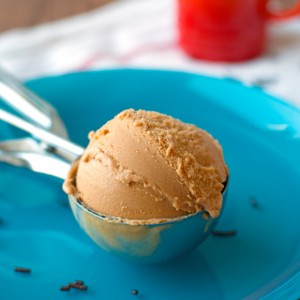