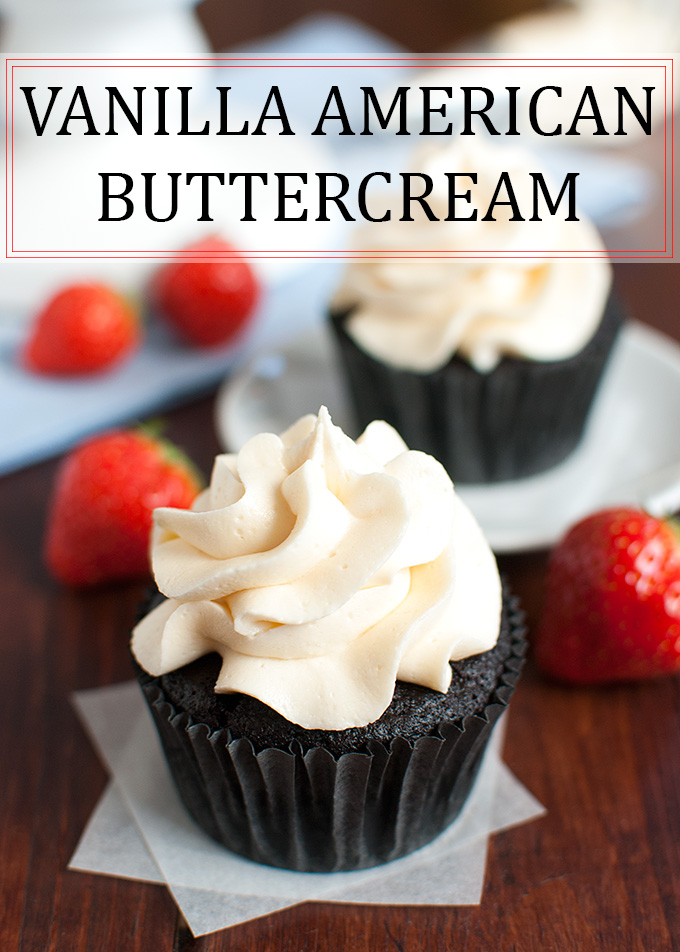 Anyway, I called the test ‘The Battle of the Buttercreams’ and to this day, it’s been the most popular series on the blog!

However, since I first posted the series I’ve learned sooo much more about buttercream! For example, I figured out the best way to incorporate ingredients, I’ve learned about the ‘dangers’ that come with making a water-in-fat emulsion and I’ve updated my recipes. So, last January, I decided to update my buttercream series.

Enter Battle of the Buttercreams 2.0!

You can find the first post of this new series here. It’s about the ‘Beaten Butter Method’ and it’s a great post if you’re looking for more details on how to make American buttercream. I will probably post it again in a few days, though… Just so all of the posts in the series are somewhat closer together. Yes, I’m weird that way. Gotta keep things organized… 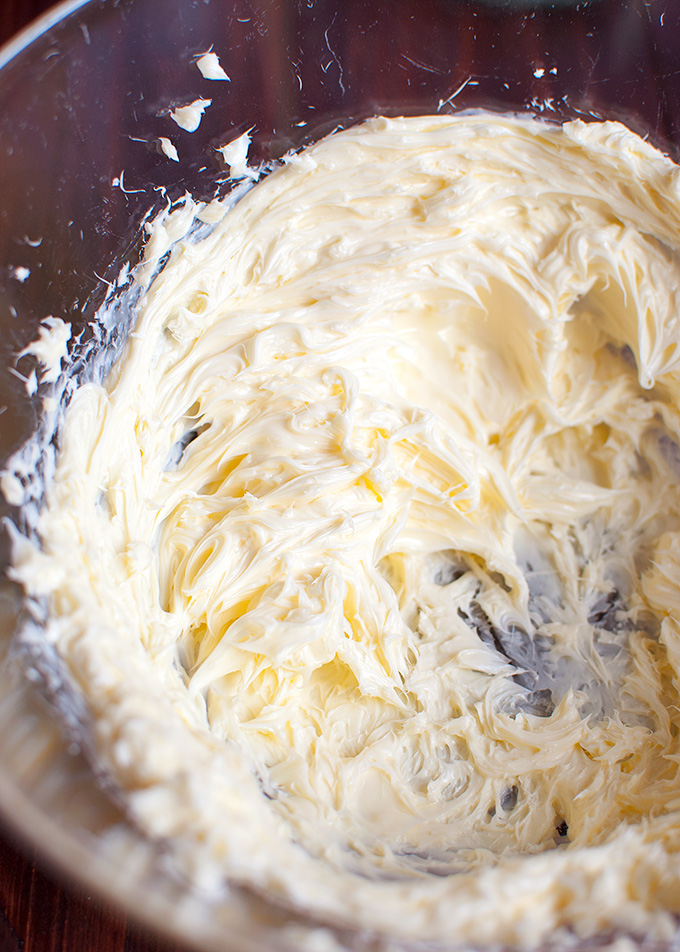 So let’s start with what I didn’t like about the American buttercream in 2013. First of all, I thought it was grainy. The powdered sugar hadn’t dissolved into the butter properly, and the resulting buttercream had a firm, gritty texture. Not at all smooth and fluffy! It definitely wasn’t what I was looking for in a buttercream, but some of my taste testers loved it…

I also thought the buttercream was just way too sweet. Now, I have to say, American buttercream, no matter how you make it, will always be on the sweet side, simply because it’s a mixture of powdered sugar and butter. However, since 2013, I’ve come across a few little tricks to make the sweetness a little less overpowering.

This new recipe for American buttercream is also a lot lighter than the 2013 version. I’ve completely changed the preparation method and ingredient ratios and the result is a creamy, smooth, fluffy buttercream with a delicious, balanced flavor. Because of the new preparation method – the Beaten Butter Method! – the powdered sugar completely dissolves into the buttercream. Oh, and a few secret ingredients mellow out the sweetness of the buttercream and brighten up the flavor!

So yeah, I’m proud to present to you: the perfect American Buttercream!

Let’s first take a look at the ingredients, shall we? 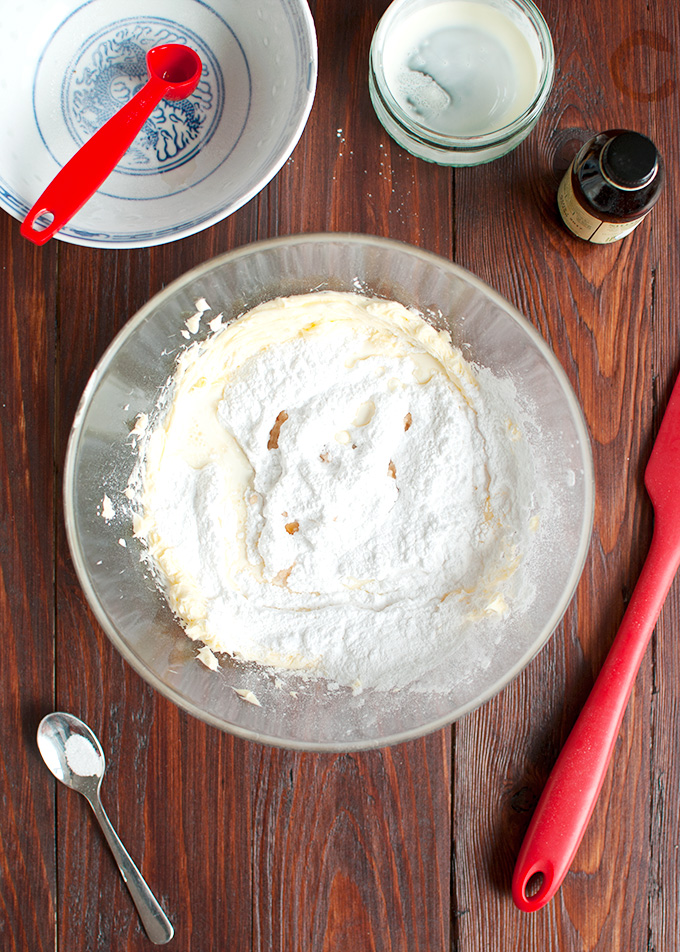 Since 2013, I’ve experimented with the amounts of butter, powdered sugar, cream and vanilla in this recipe. Although I use pretty much the same butter to powdered sugar ratio, I increased the amount of cream and added more vanilla. The extra cream not only makes the buttercream, well, creamier, it also ensures that the powdered sugar dissolves more willingly and that the resulting buttercream is smoother! 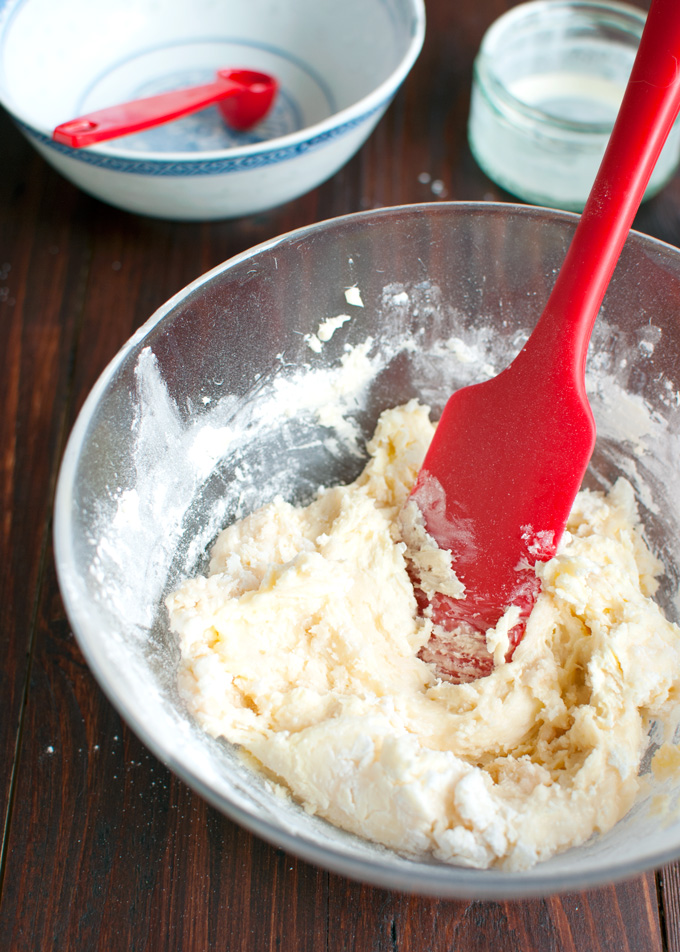 Oh, and I take it any self-respecting home baker already knows not to use the artificial vanilla flavorings? Because they’re just not as good as the real thing! If you can’t get your hands on real vanilla extract, take a vanilla pod, split it lengthwise with a sharp knife, scrape out the seeds and add the seeds to the buttercream. It tastes soooo much better! 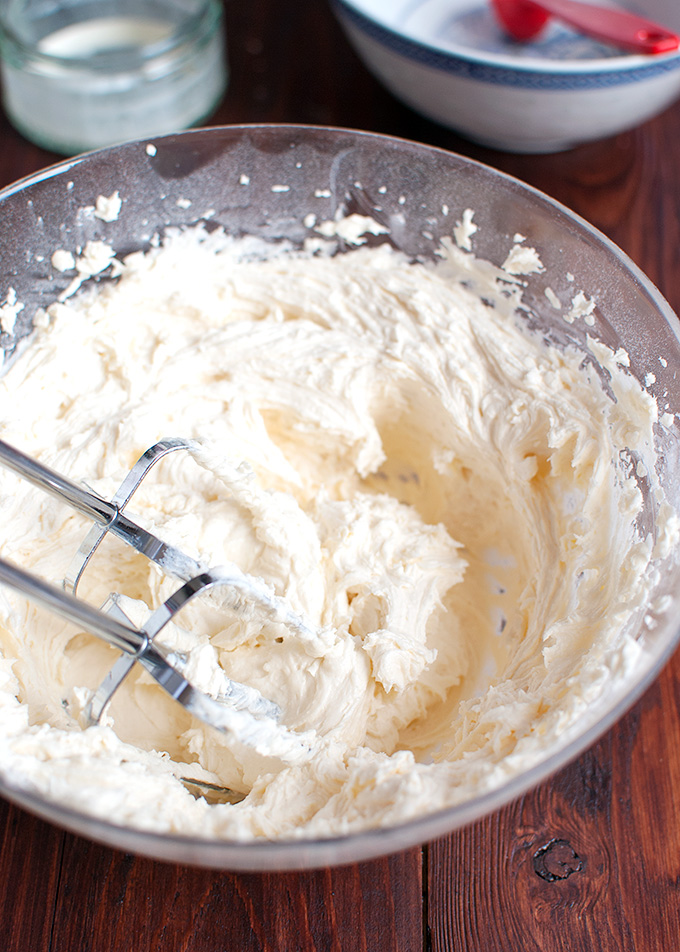 So now that we’ve discussed the ingredients, let’s talk about the preparation method!

The first thing you want to do is beat your cubes of softened butter in a medium-sized bowl until fluffy, dreamy, smooth, creamy and perfect. Like the second photo of this post. I’m sorry to make you scroll all the way up again, but there was a lot to discuss…

Anyway, see how fluffy that butter is? That’s how you want it to be before you add the rest of the ingredients: the powdered sugar, cream and vanilla (photo number 3). If you already know you want to make the buttercream a little less sweet, you can add the salt too at this point, although you can also add it later, once the buttercream has come together and you’re able to taste it.

Once you’ve added the ingredients, smush them all together using a rubber spatula or a spoon (as shown in photo 4). Now, you don’t really have to do this, it’s totally optional, and if you like all your kitchen surfaces sticky with powdered sugar, by all means start mixing at this point. But if you’re like me and prefer your kitchen to be clean, smush, smush, smush your little heart out!

Once everything is nicely smushed together, get your mixer out again. Oh, and about your mixer, you can use any kind of mixer you want. The buttercream you see in the photos was made using a simple, cheap hand held mixer fitted with two little whisk attachments (photo above), but you can also use a stand mixer fitted with either the flat beater or the whisk. Some bakers prefer to use the flat beater when making buttercream, but I don’t think it makes much of a difference…

Just keep in mind that this recipe makes only about one and a half cups of buttercream. I know some stand mixers work better with larger quantities of ingredients, so if you have a large stand mixer, consider doubling the recipe. 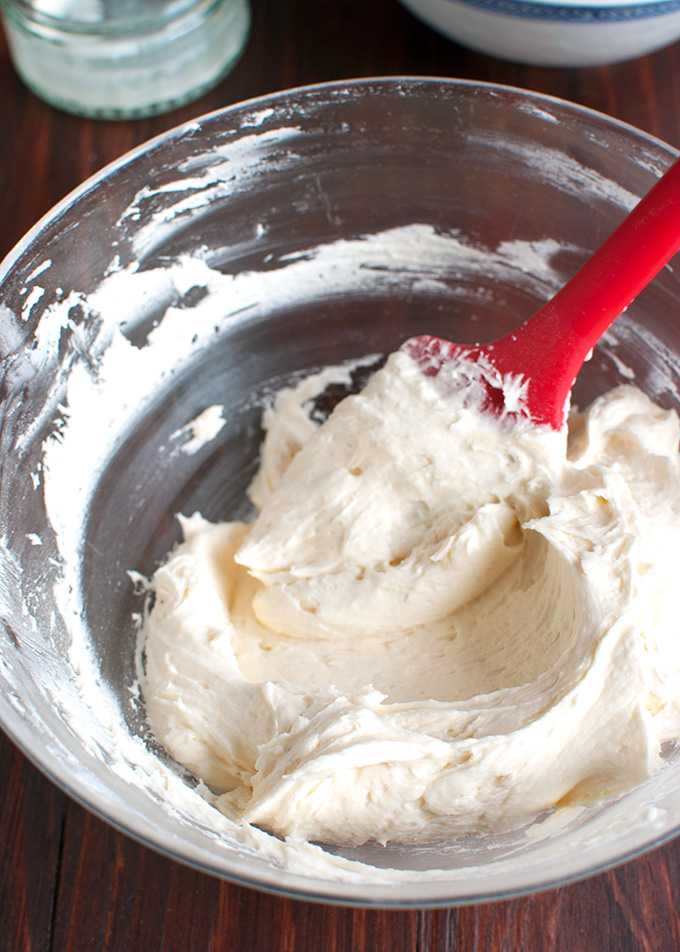 If you think the buttercream is too sweet, sprinkle a pinch of fine table salt over the surface of the buttercream, mix briefly to incorporate, then taste again. Add more salt if you think it needs it. The salt cuts through the sweetness and gives the buttercream a more complex flavor. If you’re familiar with the deliciousness of salted caramel you’ll know exactly what I’m talking about!

By the way, don’t be afraid of adding too much salt. Remember, you’re only adding a pinch at a time. I usually add about three large pinches, or maybe 1/4 teaspoon, before I’m happy with the flavor. And then I add something else, too!

Have you ever noticed that American buttercream can taste a bit heavy, despite a fluffy, gorgeously light texture? Almost cloying, even… Which is exactly why I tried to brighten up the flavor a bit with… lemon juice. And no, not a lot of lemon juice. This is vanilla buttercream, not lemon buttercream. But still, don’t you think a touch of acidity would considerably brighten the flavor of somewhat boringly sweet buttercream, making it even better? It sure does!

Once you’re happy with the flavor, grab your rubber spatula again and smush the buttercream against the sides of the bowl to get rid of any larger air bubbles (photo above). This makes piping nice designs that much easier.

I think that’s probably why some bakers prefer to make buttercream using the flat beater of a stand mixer: less large air bubbles. However, you can get the same smooth results by smushing for a minute with a rubber spatula. Much cheaper, right? Just smush, smush, smush and you’re done! 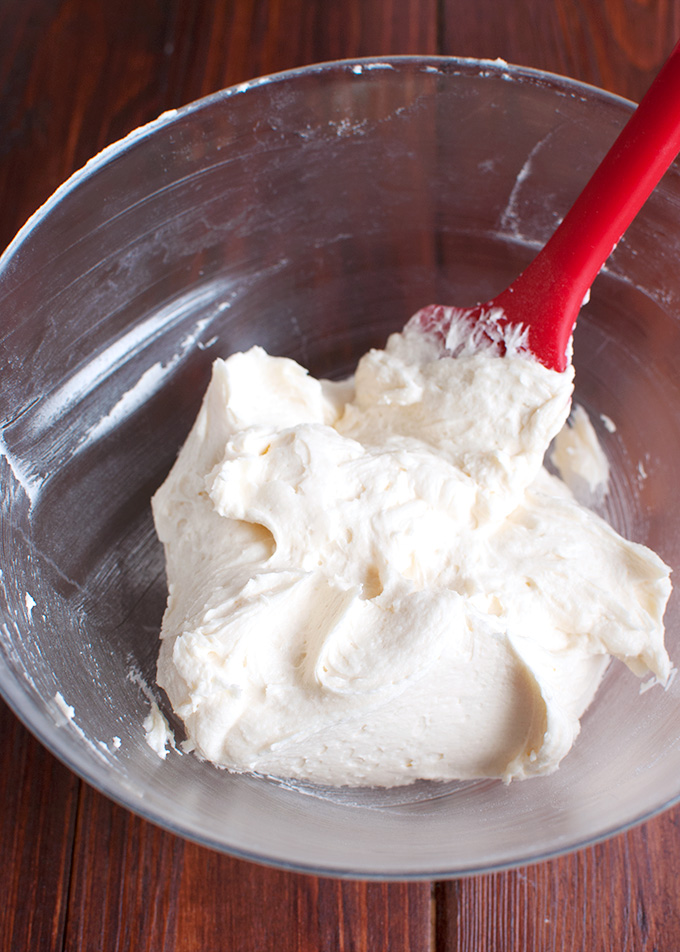 My recipe makes about one and a half cups of buttercream. 375mls to be exact, which is enough to generously frost 6-8 cupcakes. By the way, this buttercream pairs exceptionally well with those amazing and easy dark chocolate cupcakes I posted about last week.

But before we get all excited about the best chocolate and vanilla cupcake ever, let’s take a look at some of this buttercream’s characteristics:

So what do I have to add? Not much, except that this recipe has completely changed the way I feel about American-style buttercreams. Remember how I liked the American buttercream the least of all the buttercreams in the original Battle of the Buttercreams series? Well, I absolute love this new recipe!

So enjoy guys! And stay tuned for a delicious chocolate version of this recipe! 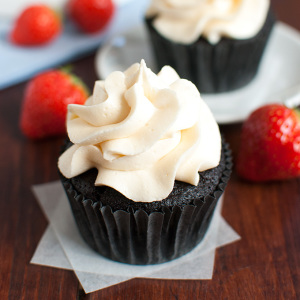 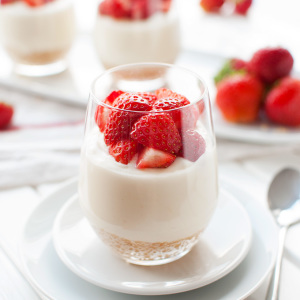 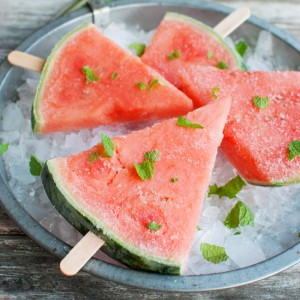