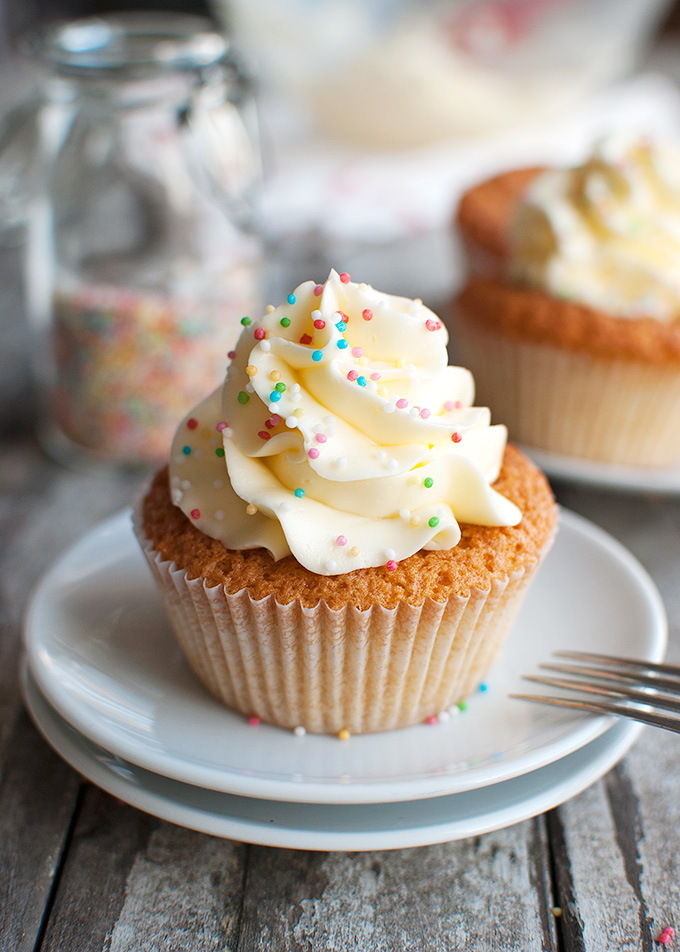 Hey guys, my baby turned! He or she managed to go from frank breech to an incomplete breech all by himself, and today the Rocking Rebel and I went to the hospital where two very nice doctors helped our baby to turn head down. As it turned out, our baby only needed a tiny little nudge in the right direction. I’m so happy and proud! I still can’t believe I’m going to be a mom in just a couple of weeks 🙂

But anyway, buttercream. Let’s focus on that now that I’ve shared my good news with the world.

This is the eleventh post in my ‘Battle of the Buttercreams 2.0’ series. I’ve already explained all about how to make the fluffiest American buttercream, flour buttercream (aka: ermine buttercream), French buttercream, and German buttercream. And I’ve shared some awesome flavor variations, of course. Have you all had a chance to read my last post on caramel buttercream? That stuff is dangerous…

By the way, back in 2013, this buttercream wasn’t very popular among my taste testers. Most thought it tasted a bit too buttery… As I pretty much agreed with that, I have since rewritten my recipe, and this new and improved recipe now contains only half (!) the amount of butter as my 2013 recipe. As a result, this buttercream recipe is a lot softer, lighter and fluffier! 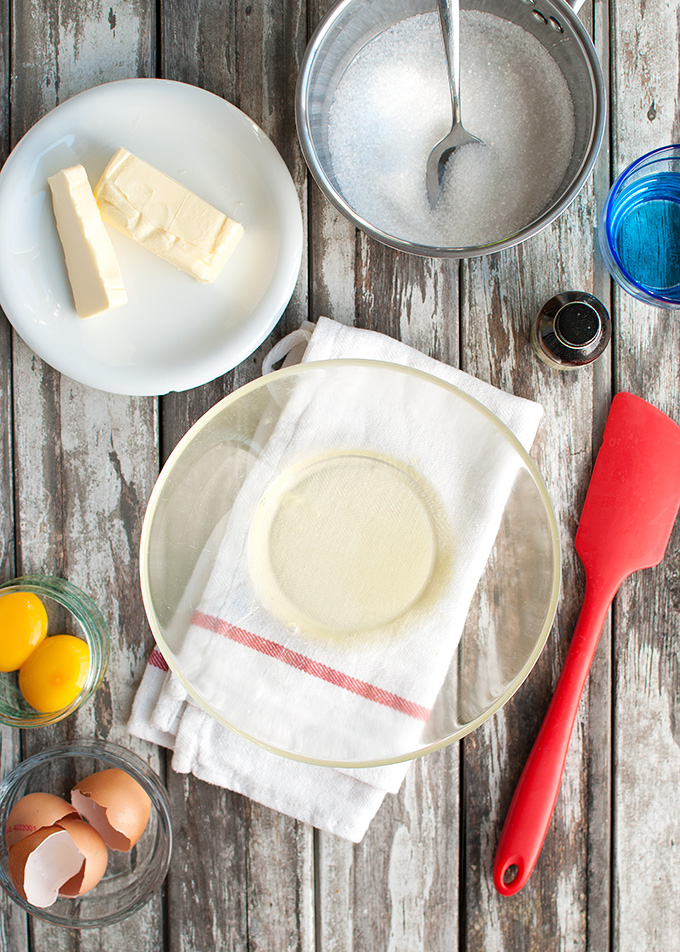 As with all the other buttercreams I’ve discussed in this series, I use unsalted butter, but you can also use salted if it’s all you happen to have on hand. What’s more, you want said butter – whatever kind you’re using – to be nice and soft. Take the butter out of the fridge 30-45 minutes before you want to use it, cube it, and allow it to come to room temperature (18-20°C/65-68°F).

For the Italian meringue, you need egg whites, a splash of water, and granulated sugar. Oh, and as I’m making vanilla Italian buttercream in this post, this recipe also calls for a drop or two of pure vanilla extract. 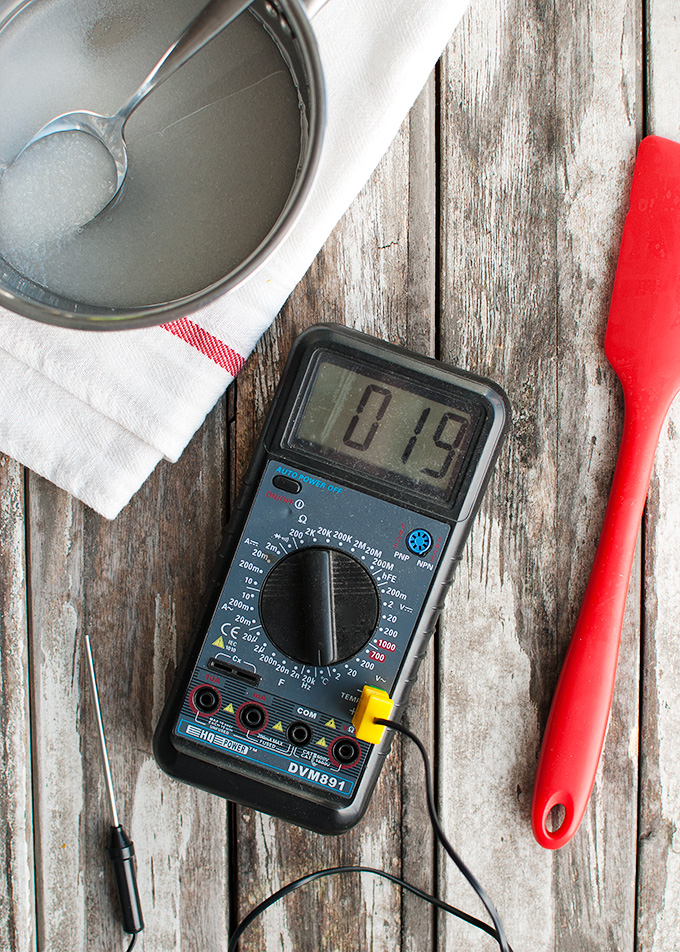 Another thing you cannot go without, is a sugar or candy thermometer, or a multimeter, like the one pictured above.

As I explain in my post on Italian meringue, this particular type of meringue is a cooked meringue, which is made by pouring hot sugar syrup into beaten egg whites. That’s where the sugar thermometer (or multimeter!) comes in: you need to cook the sugar syrup to a very specific temperature, namely 113°C/235°F.

But let’s not get too technical. All you need to know when you want to make Italian meringue is that you a) really need a sugar thermometer, and b) you need to cook the sugar syrup until it reaches a temperature of 113°C/235°F. 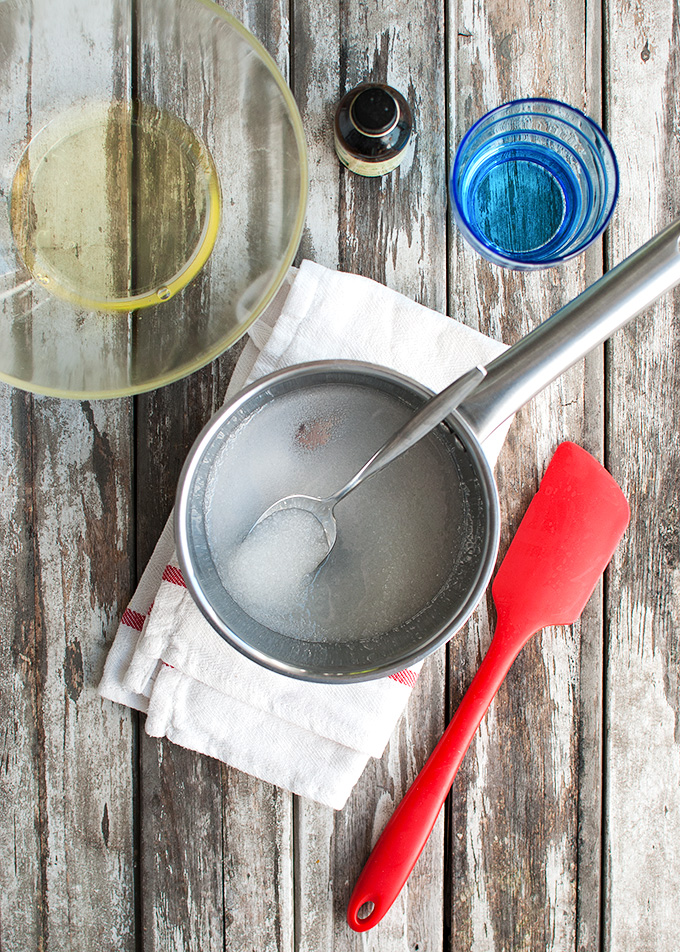 Once you’ve got yourself a sugar thermometer (be sure to check the toolbox for a multimeter before you buy one!), whipping up an Italian meringue is easy.

You start by simply combining sugar and water in a small saucepan. Heat over low heat while you stir the mixture with a metal spoon until the sugar has dissolved. Then turn the heat up to medium-high and allow the syrup to come to a boil. 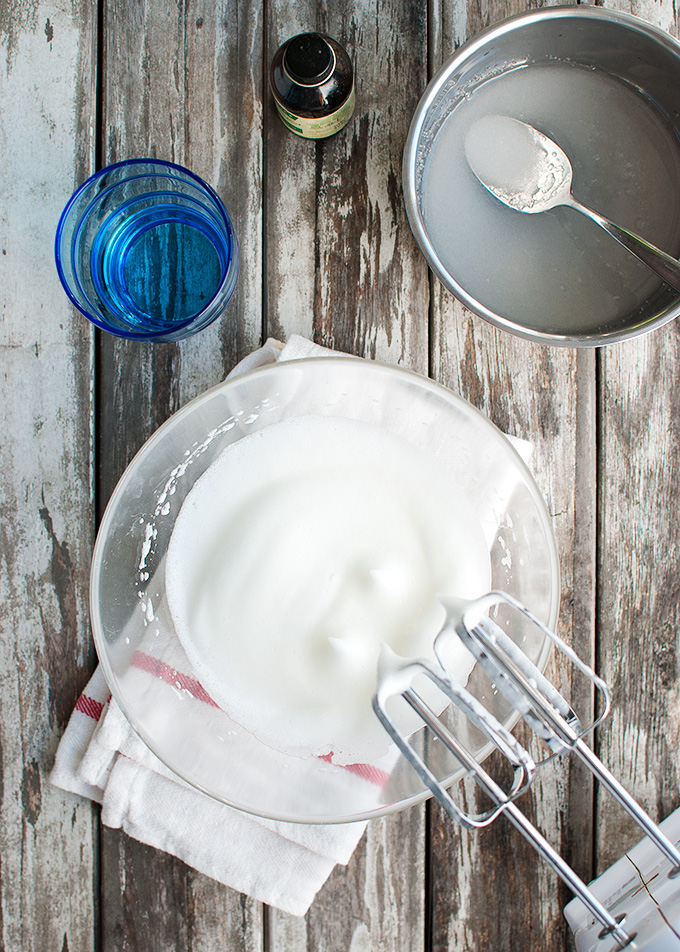 While the syrup is bubbling away (keep an eye on the temperature) beat the egg whites in a heatproof bowl until foamy and almost able to hold a soft peak.

Once the sugar syrup reaches the desired temperature, carefully drizzle the hot syrup into the egg whites, mixing continuously. Make sure not to pour the syrup directly onto the whisk attachment of your mixer, or the syrup could splatter against the sides of the bowl or into your face, which wouldn’t be very pleasant…

So please be careful! 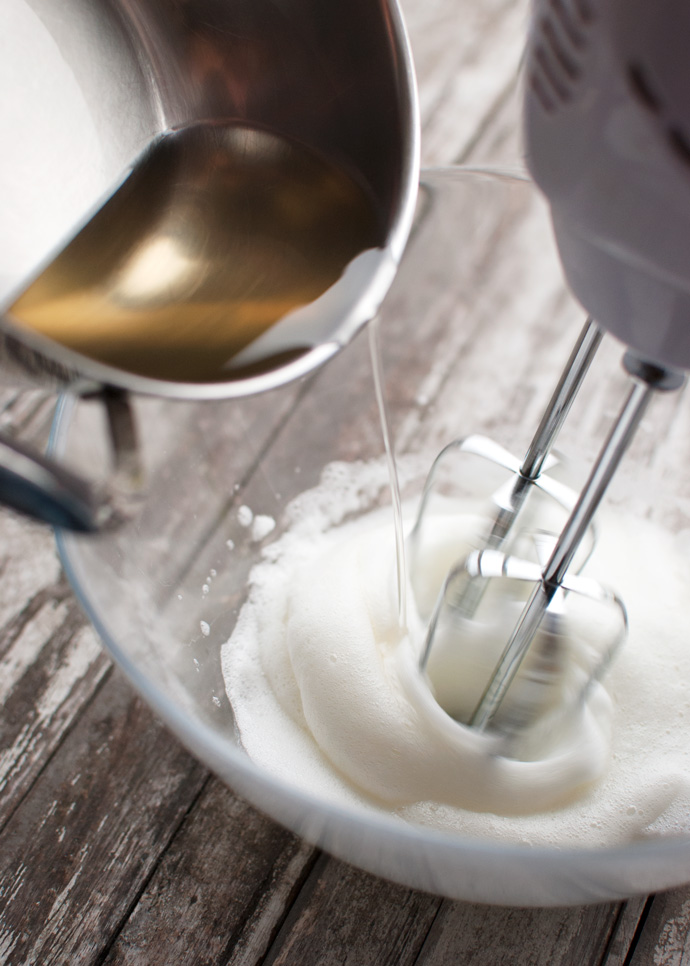 Once all the syrup has been added, keep mixing until the meringue has cooled to room temperature, the bottom of the bowl feels cool to the touch, and the meringue looks gorgeously glossy and thick. 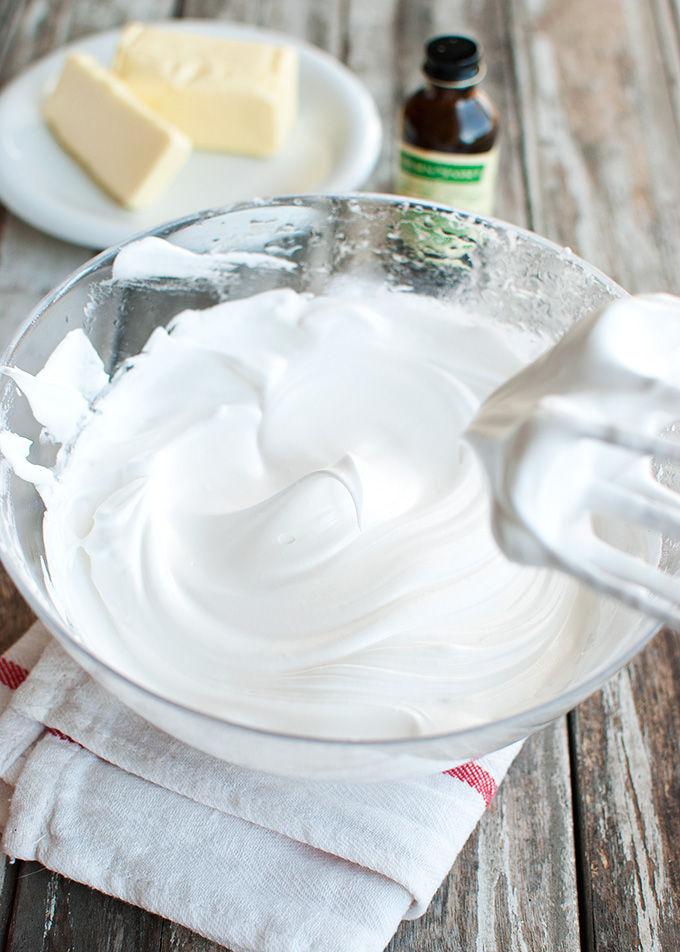 Once the meringue has cooled to room temperature, you can start adding the butter. 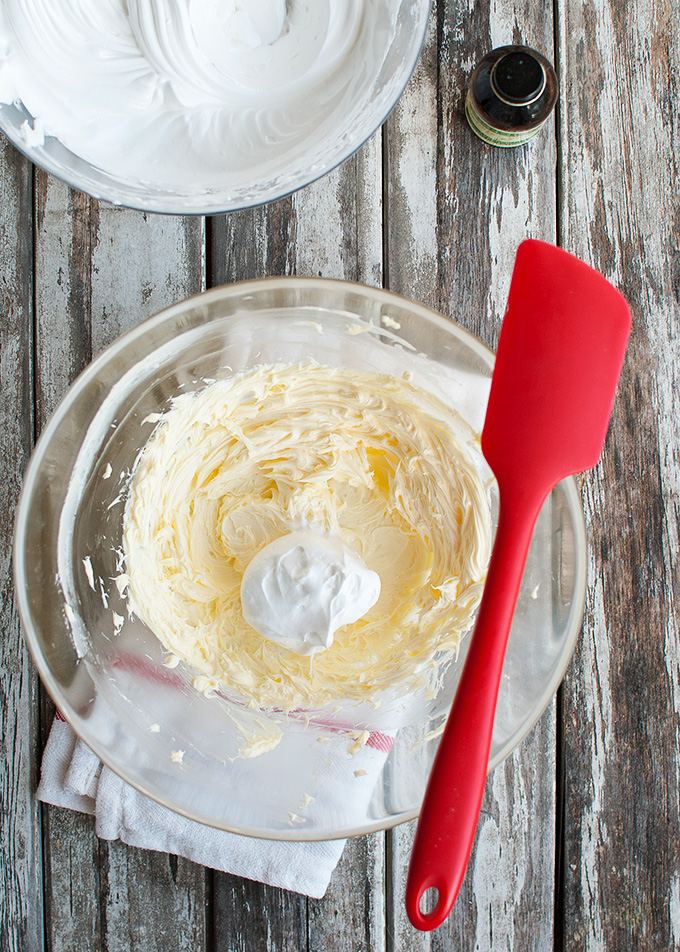 Just be aware of the fact that, if you decide to use the cubed butter method, the buttercream may at some point look like it’s separating. Don’t panic when that happens. Just keep mixing and mixing and the buttercream will come together again. Just a little tip… 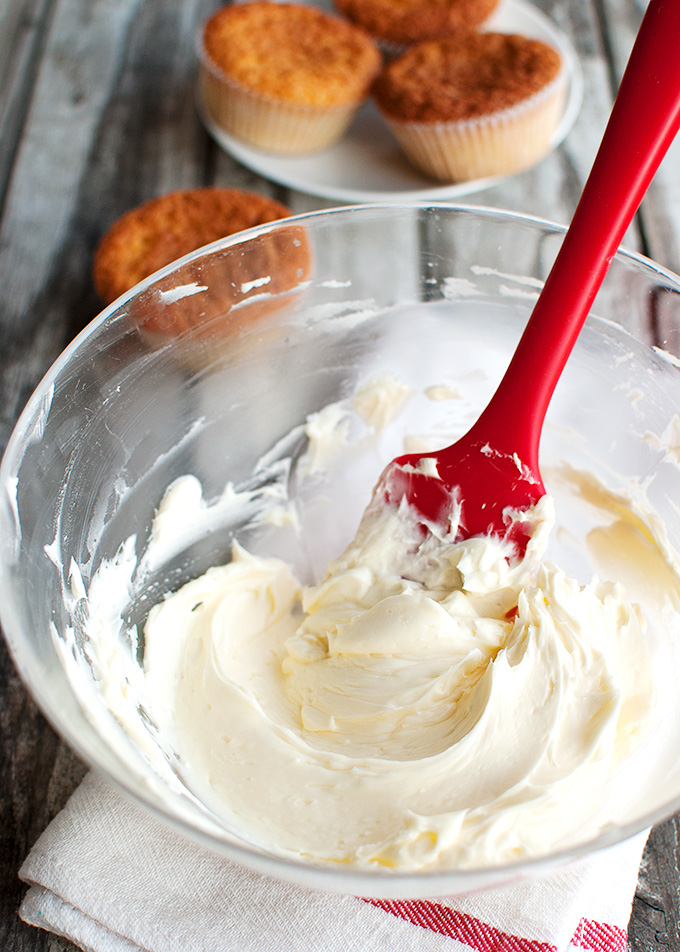 Now then, let’s look at some of this buttercream’s main characteristics:

Color: lighter than most buttercreams. This buttercream looks white against a dark chocolate cake.
Texture: smooth, creamy and velvety. It’s a bit denser than some other buttercreams, like flour buttercream.
Piping: pipes beautifully.
Level of difficulty: this is one of the more difficult buttercreams to master, because you need to cook the sugar syrup to exactly the right temperature. Also, the sugar syrup is hot! So please be careful! On the other hand, if you’ve made caramel before, this recipe shouldn’t be too hard for you.
Fat content*: 26.6%
Sugar content*: 35%
Does it form a crust: no.
* based on nutritional information

And while I hate to bring up the health-factor on a blog about desserts and cakes, I feel like some of you may like to know that this is the healthiest type of buttercream so far! Up until now, flour buttercream was the healthiest option. But not only does Italian buttercream have less calories, it also contains a lot less sugar and only 0.6% more fat! 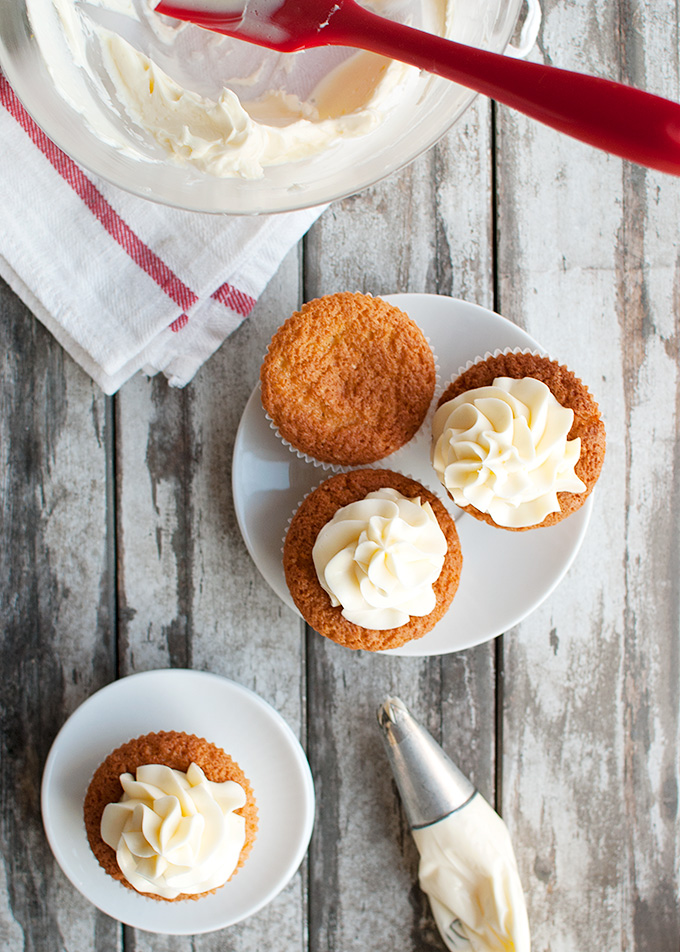 Flavor-wise, you can compare this buttercream to flour buttercream: it isn’t as sweet as American buttercream, and it’s not as heavy as French buttercream, which is made with egg yolks. It also isn’t as buttery as German buttercream. All in all, it has a pleasantly light taste, which makes it the perfect buttercream to pair with fruity flavors, such as orange, raspberry and lemon. However, I recently discovered that it also goes really well with stronger flavors, particularly pumpkin. But more on that later… 😉 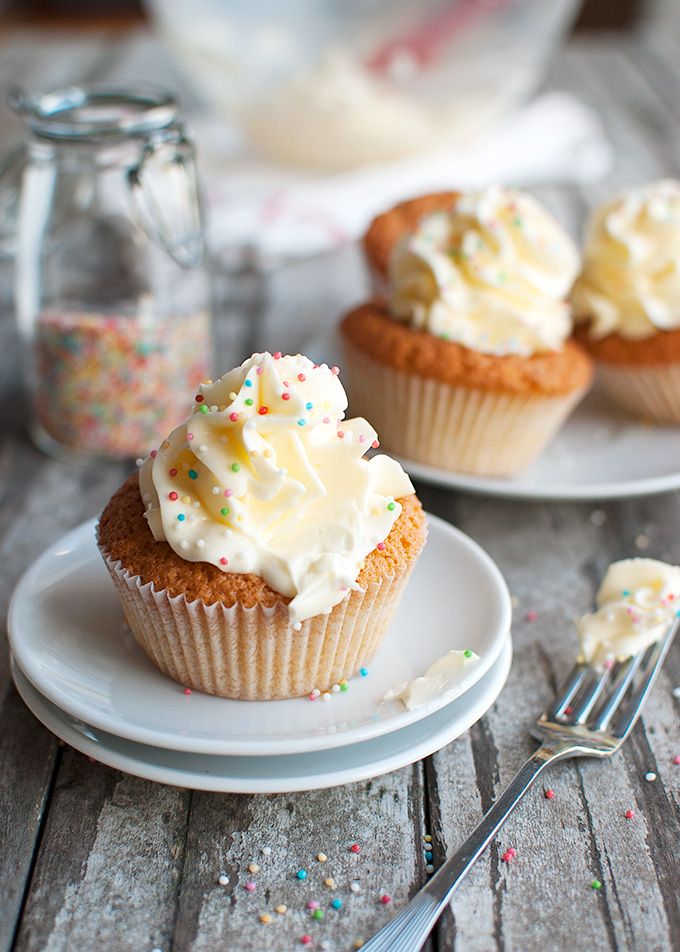 Just be aware that this buttercream contains raw eggs. Yes, hot sugar syrup is poured onto the egg whites, but I personally doubt this actually pasteurizes the eggs.

If the fact that this delicious buttercream contains raw eggs bothers you, but you love the sound of a creamy, denser buttercream with a subtle sweetness and a soft texture, Swiss buttercream may be just what you’re looking for!

I expect to post about it in a few weeks 😉 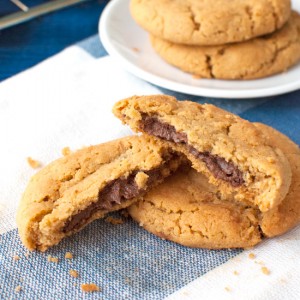