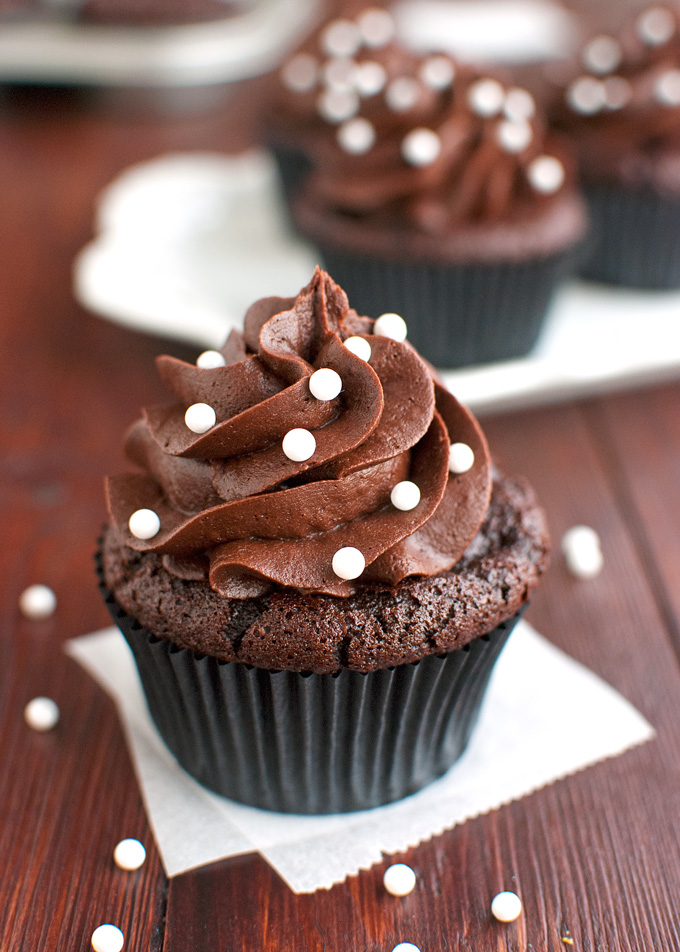 Here they are. Finally. Those amazing double chocolate cupcakes I told you guys about last week. They are the best. Delicious. Completely over the top. Insanely good. Heaven in a paper cup. And no, I’m not exaggerating. I am super impressed with these cupcakes! And it’s not just me. We celebrated the Rocking Rebel’s birthday last Thursday. I had made a batch of these and guess what? They were an absolute hit!

Oh, and then there’s the cupcake underneath the buttercream of course. Otherwise known as the best chocolate cupcakes in the world! They’re incredibly moist and tender, with a super chocolatey flavor. Seriously guys, go make these now! Especially if you’re a chocoholic like myself. I just couldn’t stop eating these…

Now just one thing: I’ll be talking about the buttercream today. You know, just because of the new and improved ‘Battle of the Buttercreams’ series. I thought it’d be fun to show you guys a few different buttercream flavors. Starting with chocolate, because chocolate is awesome and this particular chocolate buttercream – American style! – is simply the best! (do you hear Tina Turner in your head right now?)

So, if you want to make the cupcakes in the photo – the Double Chocolate Cupcakes – start with the recipe for the cupcakes here, then come back for this buttercream recipe. 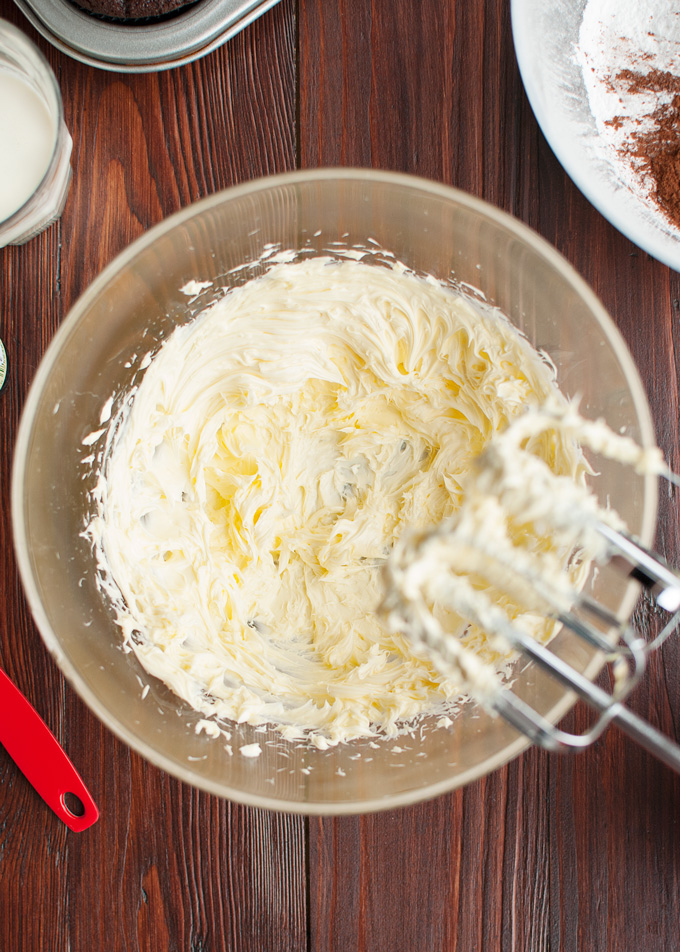 Like the vanilla American buttercream, this chocolate version starts with unsalted butter that has been softened at room temperature.

I usually cube the butter straight from the fridge, then allow it to soften at room temperature for about 30 minutes before beating it until fluffy and creamy. I’ve tried softening the butter for longer, say an hour, but you don’t want the butter to be too soft, because the buttercream may turn out a bit looser. Not that this is much of a problem, though… If you think the resulting buttercream is too loose, just pop it in the fridge for about fifteen to thirty minutes, then beat again with a mixer. It should have firmed up nicely…

But when all you have is salted butter, feel free to use it! Just keep in mind that you may not need to add extra salt.

Anyhoo, after beating the softened butter for two to five minutes with a mixer , it should be creamy, fluffy and gorgeous. Like in the photo. By the way, you can use any kind of beater you want. Some home cooks prefer to use the flat beater of a stand mixer, saying that the resulting buttercream has less large air bubbles, but I don’t think it matters much… 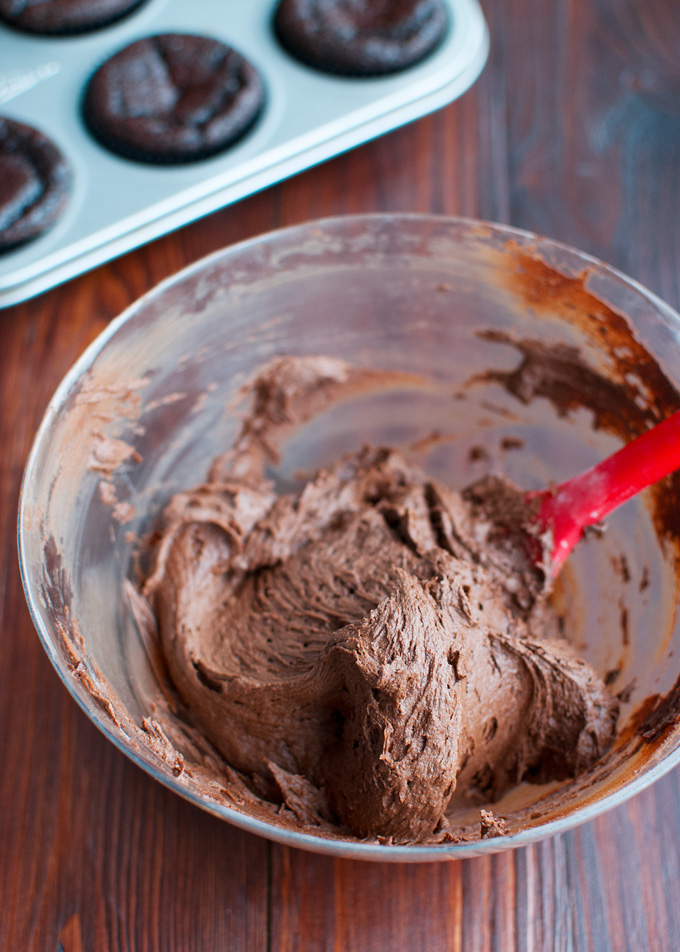 Once the butter is fluffy and creamy, add powdered sugar, a fair amount of Dutch-processed cocoa powder, a little vanilla extract and a splash of heavy whipping cream. Smush the ingredients together with a rubber spatula or a spoon until the dry ingredients have absorbed the wet ingredients – this is to prevent a big cloud of powdered sugar in your kitchen – then mix again with the mixer until smooth and creamy.

Now for the most important step: taste!

Taste a lot! Now is your chance. You’ve got that big bowl of chocolate buttercream all to yourself for now…

No, in all seriousness, tasting really is important. The buttercream may need a sprinkling of fine table salt. Taste, and if you think it’s a bit on the sweet side, add some salt. Taste again, add more salt if you think it needs it. Chocolate loves salt!

Once you’re happy with the flavor, grab your rubber spatula again and smush the buttercream against the sides of the bowl for a minute. This is an easy way to get rid of any larger air bubbles, which can make piping a pain if they end up in your piping bag. Smush, smush, smush, and you’re done! You’ve made yourself the most ridiculously delicious chocolate buttercream in the world! 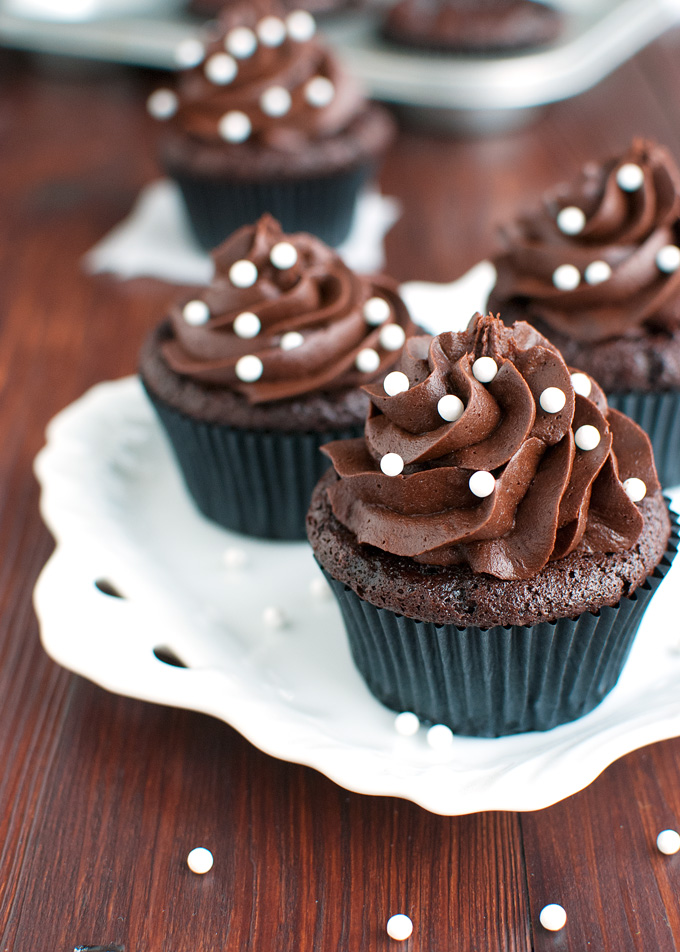 Because this buttercream can be whipped up in less than 10 minutes, I always make it right before I want to use it.However, you can totally make this ahead of time. 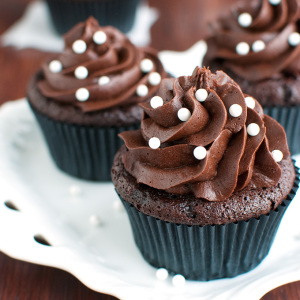 Print
Prep time
10 mins
Total time
10 mins
Makes about 600ml, or 2½ cups. Enough to generously frost 10 cupcakes. The recipe can easily be doubled to make 5 cups of buttercream, which is enough to fill and frost a 18- to 20-cm (7- to 8-inch) cake.
Author: The Tough Cookie
Ingredients
Instructions
Notes
* I usually cube cold butter, then allow it to come to room temperature in about 30 minutes.
** To be honest, I usually store frosted cupcakes at room temperature in an airtight container, but I'm not sure whether this is really safe, because there's dairy in the buttercream. Therefore, I advise you to store them in the fridge.