This whipped cream frosting is incredibly stable. It holds its shape for several days! Because I use a simple homemade pudding to stabilize it, it’s also deliciously light and super smooth! 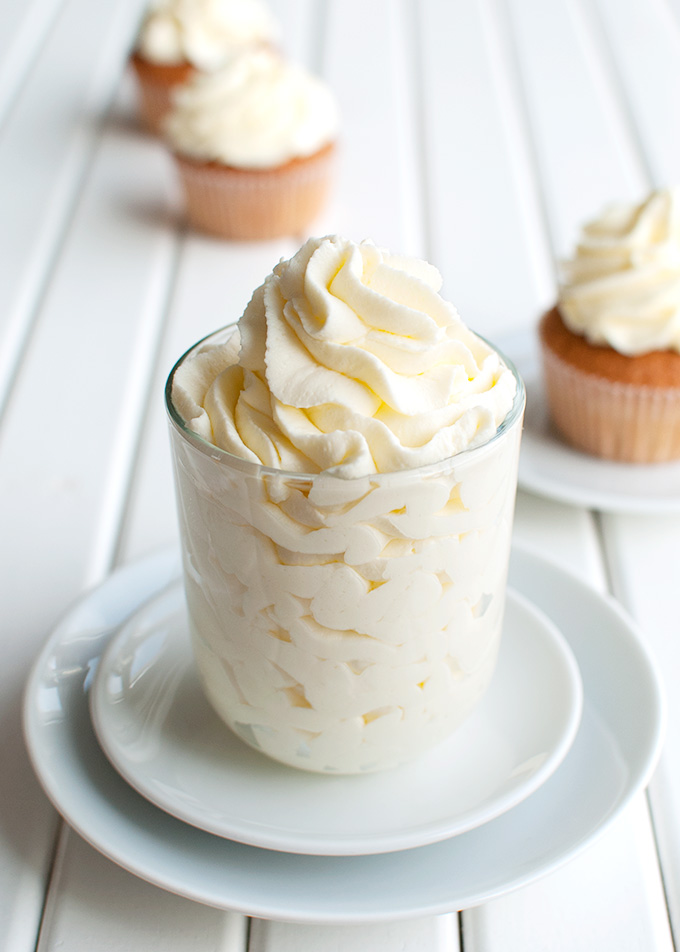 So. Whipped Cream Frosting. How’s it going, guys? Long time no see. I’ve been doing a bit of summering because it was SWELTERING HOT this week! I’m not complaining 😀

But back to whipped cream frosting. This stuff is good. I already told you a thing or two about it in last week’s post (have you tried that insanely delicious Forest Fruit Cake??) but I wanted to explain the beauty of whipped cream frosting a bit more. With step-by-step photos, of course, because photos make explaining things so much easier.

So let’s see. Why do you need whipped cream frosting?

If you’ve frosted a cake or cupcakes with whipped cream before, you know what happens to whipped cream if it sits too long. It collapses. It starts to leak moisture. It completely deflates and instead of looking like a sweet, fluffy cloud it just looks sad and wimpy. Not a good look at all.

By stabilizing whipped cream, you ensure that it holds it shape. As I explained in my post on Forest Fruit Cake, there are a number of ways to stabilize whipped cream. You can use packaged whipped cream stabilizers, which are basically sweetened cornstarch, you can use – you guessed it – cornstarch itself, or you can use gelatin. I personally don’t like any of these methods. Using gelatin can be tricky and you may end up with yucky strings of gelatin in your frosting, while adding cornstarch gives the whipped cream a grainy texture and a weird starchy flavor.

However, if you use the cornstarch to make a pudding and use that to stabilize the whipped cream, the end product won’t be grainy or starchy! 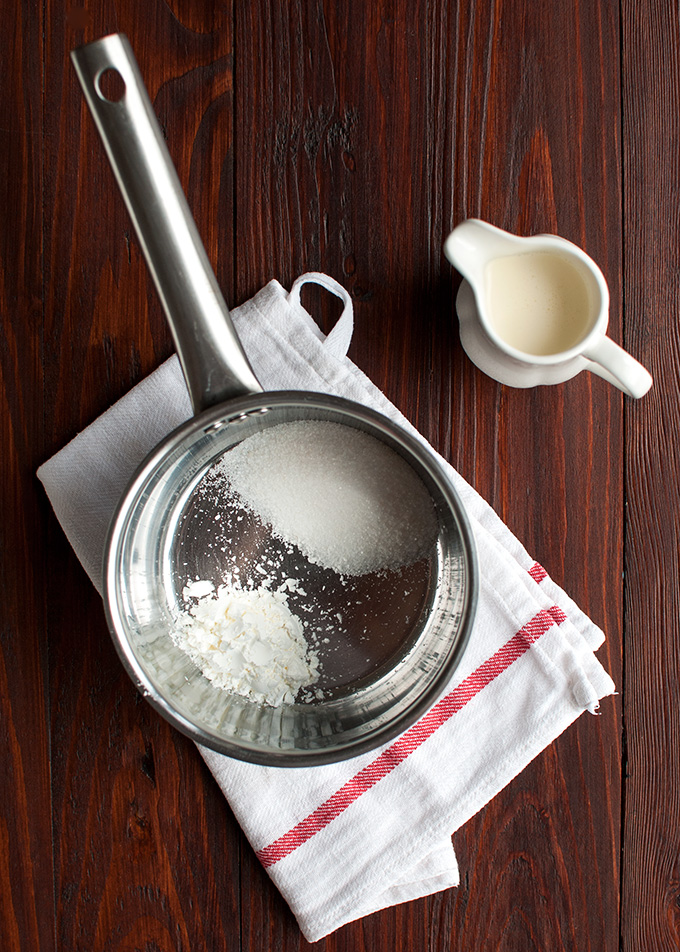 I read about this technique on the Food 52 website. There’s a post by one sdebrango in which she/he explains about stabilizing whipped cream with a pudding made with cornstarch, powdered sugar and cream. Thanks for the great tip sdebrango!

So for this recipe, you need just 3 basic ingredients: cornstarch, granulated sugar, and heavy whipping cream. 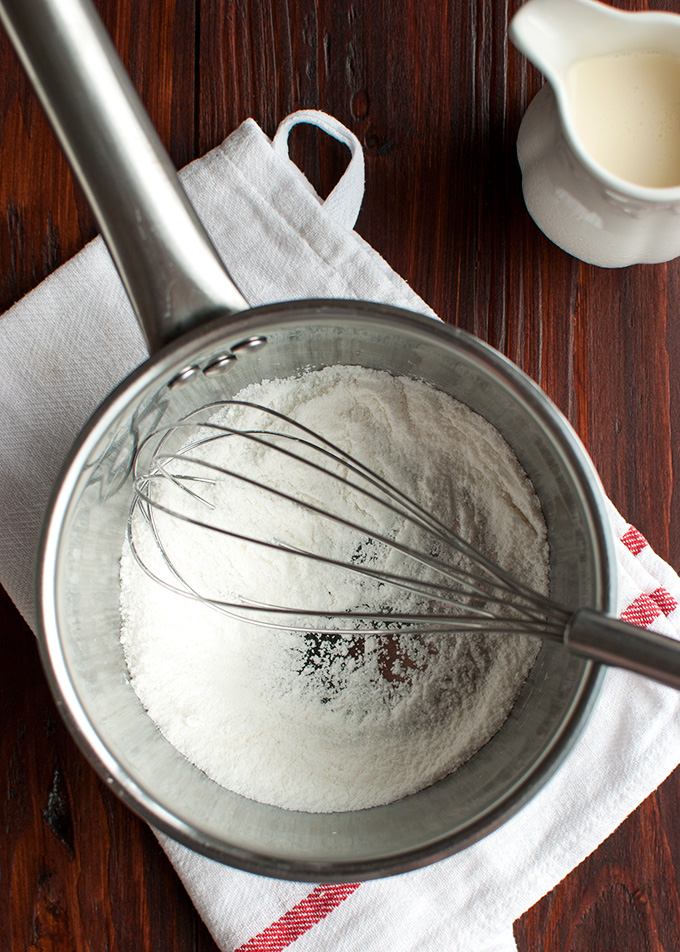 The first thing you do is whisk granulated sugar and cornstarch together in a small saucepan. The whole whisking together part ensures that the cornstarch doesn’t clump together once you add the cream. 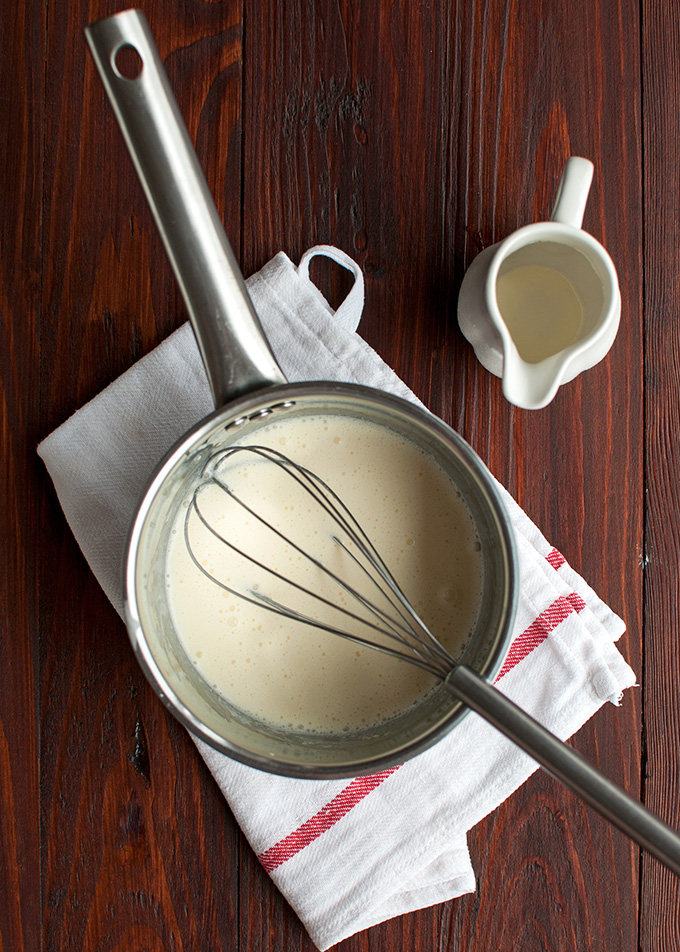 Add the cream and whisk, whisk, whisk to make the mixture bubbly and frothy. I always find that the bubbles really help when you’re making pudding or custard, because they disappear once the mixture thickens and let you know when the pudding is almost done ← great visual cue!

Place the pan with frothy cream over low heat and heat the mixture while you keep whisking. Once the bubbles dissipate and the mixture thickens, cook the pudding for another minute, then remove it from the heat. Transfer it to a plate, press plastic wrap directly onto the surface to keep a skin from forming, then chill the pudding until completely cold.

Oh, by the way, the pudding will look a bit weird and yucky, but that’s okay. It will get better! 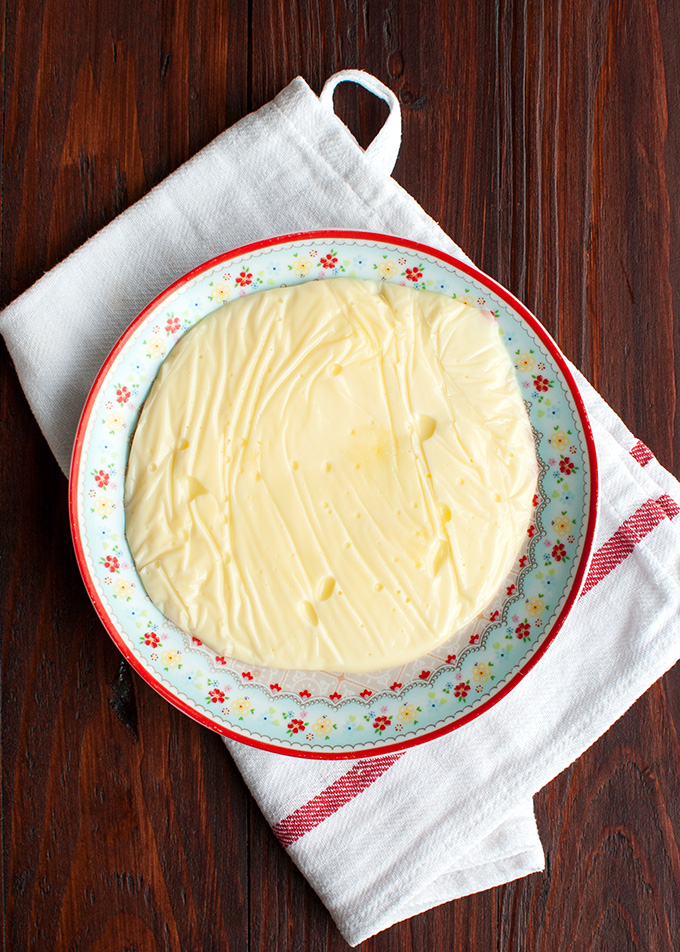 Once you’ve chilled it, the pudding will be super thick, almost rubbery. As you can imagine, rubbery and whipped cream don’t mix very well, so I like to lighten the pudding a bit before adding it to the whipped cream by beating it with an electric mixer for a few minutes. I use a mixer with a whisky thing like this for that. Anyway, by thus aerating the pudding, you make it a los easier to incorporate it into the cream.

So. Whip some cream until it barely holds soft peaks, add the light, fluffy pudding one spoonful at a time. Beat well until the cream holds firm peaks, and done! Delicious whipped cream frosting that is almost if not as light as ordinary whipped cream but which holds its shape for days!

Oh, and if you like this frosting to be super sweet, just use more sugar. If you don’t like sugar at all, just don’t add it or use another sweetener, like honey. You can also add some vanilla or almond extract. Or maybe lemon or orange zest. Or grated coconut. It all works! 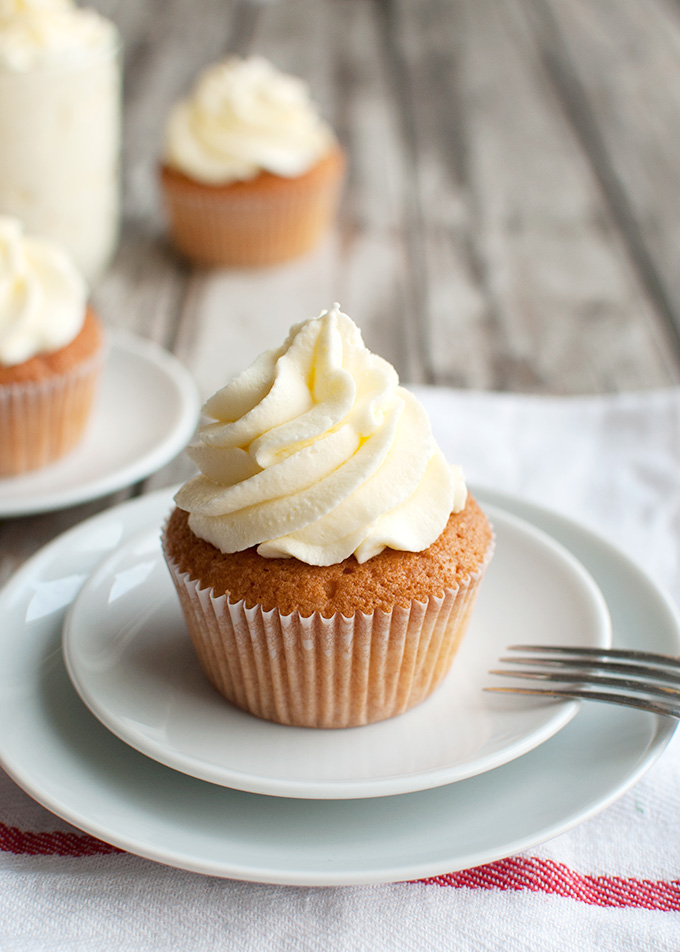 That’s it. Super easy, super light, super smooth whipped cream frosting that won’t collapse or leak. Seriously, I kept that swirly bowl you see in the first photo in the fridge for four days and the swirl didn’t collapse or anything!

These cupcakes didn’t make it, though. The Rocking Rebel and I ate them.

Pinners please scroll down for a beautiful pin! And if you like to have delicious recipes such as this one delivered straight into your inbox, click here to sign up to my mailing list. I even have a little treat coming up for everyone who signed up: my Five Favorite Frostings Ebook! It’s going to be soooo cute! So make sure to sign up 😉 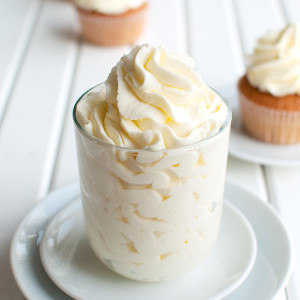 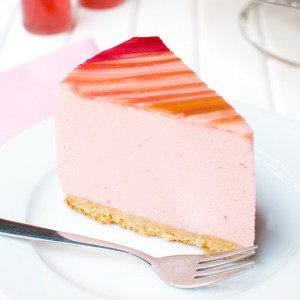 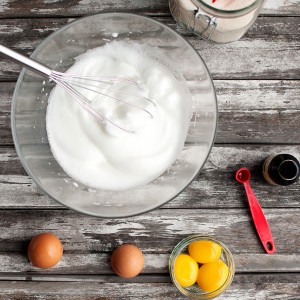