Off all those September recipes I’ve posted in my three years of blogging, these are the ones I keep going back to. 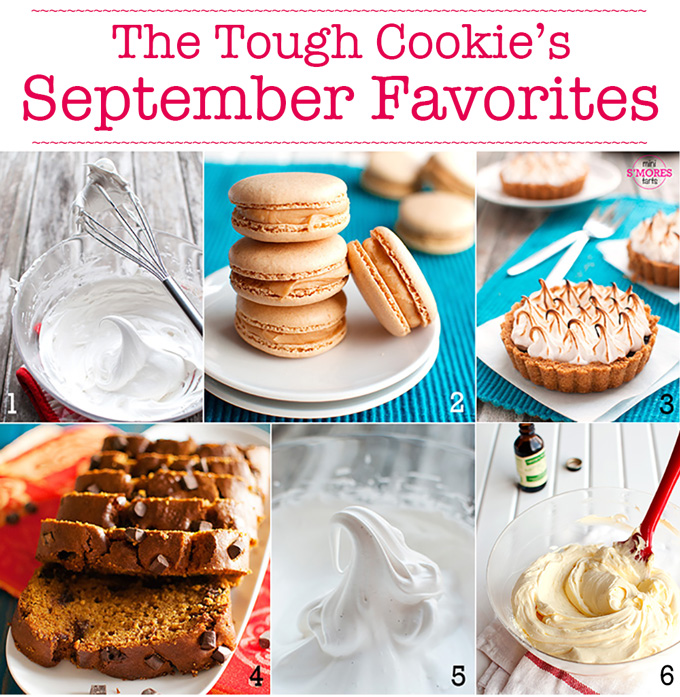 Hey guys, what did you think of those super cute Raspberry Tartlets? The Rocking Rebel keeps begging me to make yet another batch, but to be honest I’ve got my mind set on other things. I recently got this awesome cookbook at the library, written by award-winning pastry chef Roy Fares: ‘The United States of Cakes‘. There are amazing recipes in there, including an apple cheesecake with a streusel topping and caramel sauce I’ve been obsessing about. And guess what I’m making this afternoon? ????

If the cheesecake is a success – and I’m betting it will be – I’ll make sure you guys get the recipe. For now, let’s check out my September favorites. I’ve been blogging for about 3 and a half years now, and I’ve made over 250 blog posts, 15 of which were posted in September. It was pretty hard choosing only six favorites, but here they are:

1. How to Make Italian Meringue

Ah yes, Italian meringue. I need more of it in my life… You guys remember my meringue series? I started my series titled ‘The Different Kinds of Meringue‘ with a post on how to make Swiss Meringue, followed by this post, in which I explain all about Italian meringue. If you’re a meringue geek, you’re gonna love this post. It’s pretty detailed and there are step-by-step photos!

In short, Italian meringue is made by pouring a hot sugar syrup into beaten egg whites. Add butter to it to make yourself Italian buttercream, or fold in almond meal and powdered sugar to make the most delicious macarons ever! Scroll down for the recipe 😉

Stop scrolling now! I was talking about this recipe. These macarons are insane! If you like salted caramel – like any sane person – you’ll definitely love these.

Just beware, macarons are finicky little things, and making them can be tricky. Lucky for you, though, this is a great recipe. Way, way, waaaaay back in 2007, when I first started making macarons, I tried making them using the French method, which seemed sensible, as these are French macarons, but which resulted in tough, hollow little almond cookies that in appearance kind of resembled macarons, but which were actually pretty far from the real deal. Trust me, the best macarons are made using the Italian method. Aka, by first making an Italian meringue. Don’t get me wrong, macarons are still a difficult cookie to master, but these babies are worth some tries!

These particular macarons are filled with a salted caramel filling. You first make some caramel, whisk in cream and a fair amount of butter, and allow the caramel to cool. Once cool, the caramel is whipped until it reaches a buttercream-like consistency. Add sea salt – fleur de sel if you have it! – and you’re done! Well, once you’ve filled the macarons, that is…

I made these cute, individual Mini S’Mores Tarts right after I whipped up a batch of Swiss meringue for my meringue series. I made a basic crust of digestive biscuit crumbs – but feel free to use graham cracker crumbs instead – filled the fragile (!) little crusts with a simple chocolate ganache, then topped the ganache with small Swiss meringue kisses.

Swiss meringue is perfect for this! It’s thick and marshmallowy, like a big puffy cloud of deliciousness. In fact, I prefer Swiss meringue over actual marshmallows on these tarts! Use a kitchen torch to give the meringue that typical campfire-toasty flavor and enjoy!

Oh, and do yourself a favor: don’t accidentally crush your perfect little tarts with a light reflector. Don’t be like me…

This pumpkin bread is delicious. It got me through many long days of thesis writing (read: staring at a blank word file) back in the day. In my experience, thick slices of pumpkin bread studded with dark chocolate chunks really do take the edge of thesis-writing. Not that it helped me think of intelligent things to say or anything… On the contrary. It got me thinking about other pumpkiny things, and how badly I wanted to make them/eat them!

But still, if you like pumpkin and chocolate, add this bread to your to-bake list. You will not regret it!

5. How to Make Swiss Meringue

Like I said, this was the first post of my series ‘The Different Kinds of Meringue’. I love, love, love Swiss meringue! As it happens, I also need more of this in my life…

Unlike Italian meringue Swiss meringue is really, really, really easy to make. You just throw egg whites and sugar in the bowl of a double boiler, stir the two together, gently heat until the sugar dissolves, remove from the heat and beat with a mixer until it holds the peak that you want! Or, and this is the best part about Swiss meringue: if you want to pasteurize the meringue (aka: making it salmonella-safe) bring the mixture up to 71°C/160°F first, then remove from the heat and whip. It’s where I got the idea for my salmonella-safe French buttercream…

German buttercream is awesome. It’s made by adding spoonfuls of homemade custard or vanilla pudding to beaten butter. The result is deliciously buttery, creamy and smooth. Like vanilla-y velvet in your mouth.

I also have a recipe for caramel German buttercream, which is even more addictive, and which I used to top the ultimate fall cupcakes: Caramel Apple Cupcakes with a homemade caramel apple sauce filling. Soooo good!

So there you have it. My six favorite September recipes. Though now that I’ve made the list, I feel like I should have included that amazing French Coffee Buttercream, and the Hazelnut Meringue Layer Cake I made with it. And while I can’t look at the photos of my post for Mocha Meringue Kisses without cringing, the kisses themselves are dangerously good! 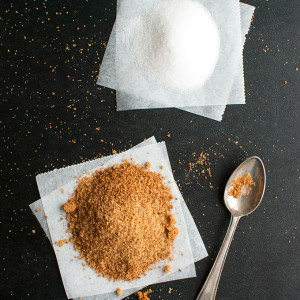