It’s rhubarb season, so time for an old favorite: rhubarb and custard. In cupcake form! These fluffy vanilla cupcakes are filled with a tangy rhubarb puree and topped with a swirl of custard buttercream, rhubarb syrup and crunchy crumbs! 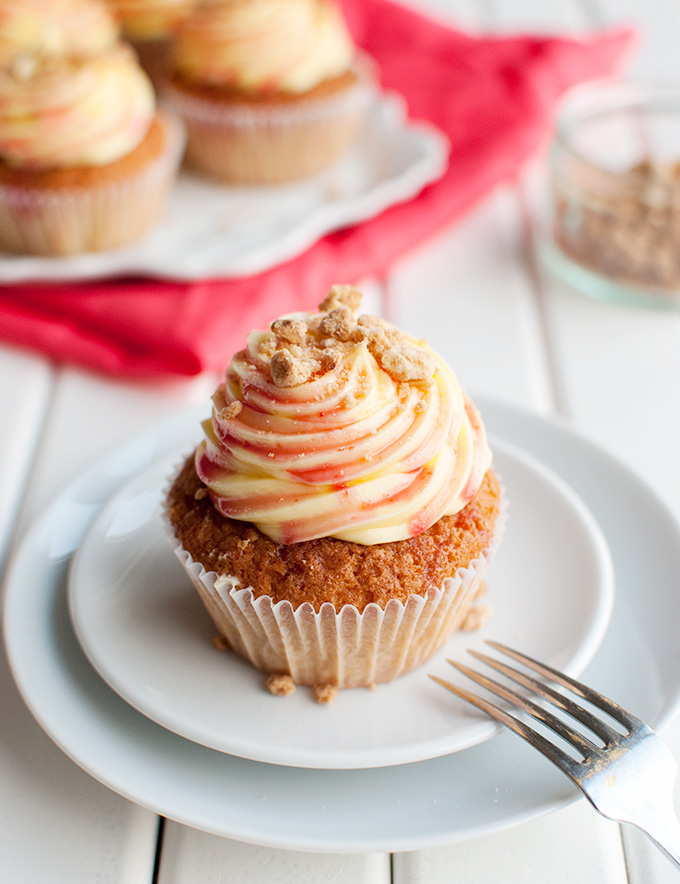 About a week ago, one of my favorite Youtubers Cupcake Jemma baked up a batch of Rhubarb Crumble & Custard Cupcakes. And I was like: wait, what? Rhubarb? Already?! But yes, of course: “rhubarb already”. After all, it’s almost Mother’s Day!

I have a GREAT mom (hi Mom!), and she happens to love rhubarb. As I’ve made her rhubarb-y sweets for Mother’s Day a couple of times, the two are now inextricably connected in my mind.

Mother’s Day = rhubarb is in season!

And now that we’re on the subject of Mother’s Day, I’m celebrating my SECOND Mother’s Day as a mom this year (again: wait? what?), which makes me feel so proud and grown up! I think I’m going to wear a plastic tiara for the occasion. Or maybe brush a handful a glitter in my hair? I’m not sure yet, but it’s gonna be something festive. I can’t wait to find out what the Rocking Rebel has planned for me, but since Mother’s Day is ALSO the Rocking Rebel’s birthday this year, I’ve got a lot of things planned for him (a birthday party/picnic in the park, with a choice of different kinds of apple pie, to be specific)!

(Btw, if you’re an apple person, like the Rocking Rebel, you MUST check out his recipe for Apple Cookie Crumb Cake. It’s delicious!)

But wait, back to these rhubarb and custard cupcakes. 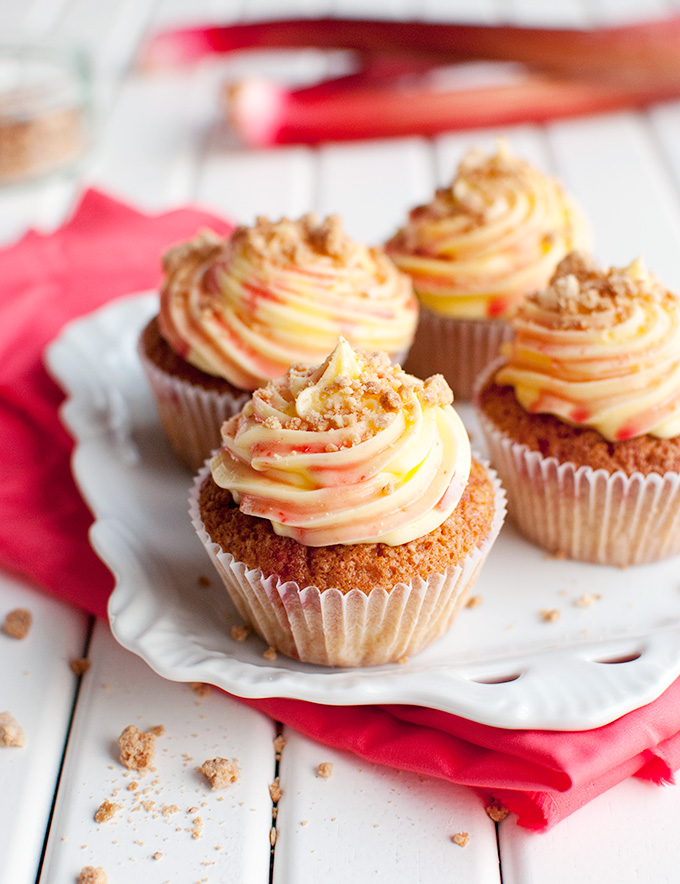 These cupcakes are inspired and partly adapted from Jemma’s recipe. Being the baking-know-it-all that I am (wait. Let’s change that to: super-experienced-and-seasoned-home-baker-who-intuitively-knows-how-to-make-recipes-work, shall we?) I changed her recipe a bit.

First of all, I used my own perfect vanilla cupcake recipe for the cake part. Jemma’s cupcakes are actually vanilla cupcakes with a rhubarb ripple, but I didn’t feel like taking the ripple route. Too much of a hassle.

I’ve also come up with my own recipe for custard buttercream because Jemma’s recipe was a little vague on that. 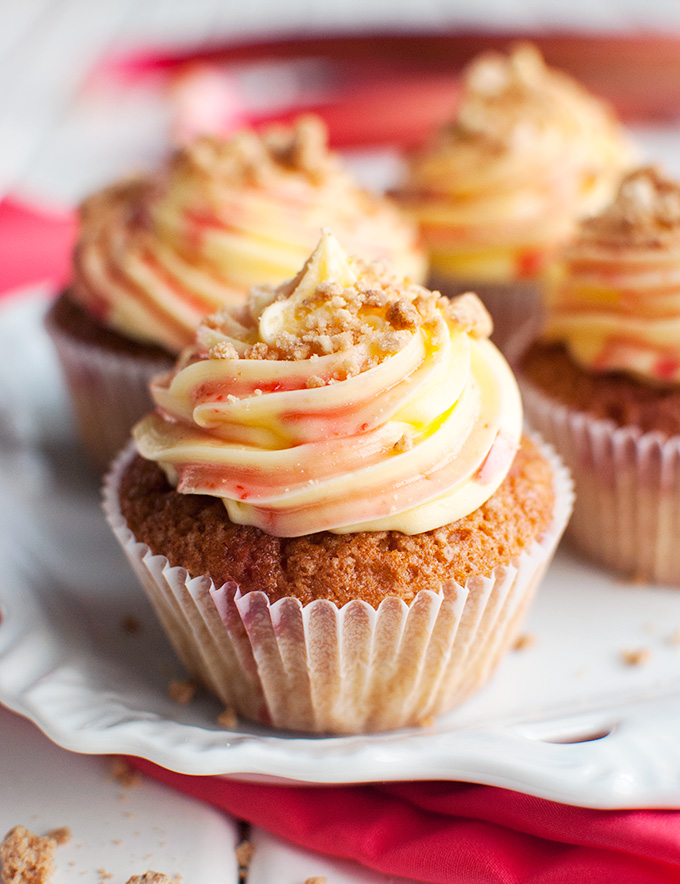 Next, I adapted Jemma’s recipe for the rhubarb puree – or goo, as she calls it – because I found the orange and vanilla in her recipe a little too strong.

The rhubarb goo is made by combining rhubarb (use the red or pinks stalks for a pink puree!), sugar, water, vanilla, and a little orange zest in a baking tray, covering it tightly with aluminum foil, and baking it for about 20 minutes. The rhubarb will break down, and you’ll be able to strain the liquid off. The liquid is turned into a tangy rhubarb syrup which is then drizzled on top of the cupcakes, while the rhubarb is blitzed in a food processor to make a fine puree.

Finally, the crunchy crumbs sprinkled on top give the cupcakes a bit of bite and more of a rhubarb-crumble feel. They’re also very yummy! 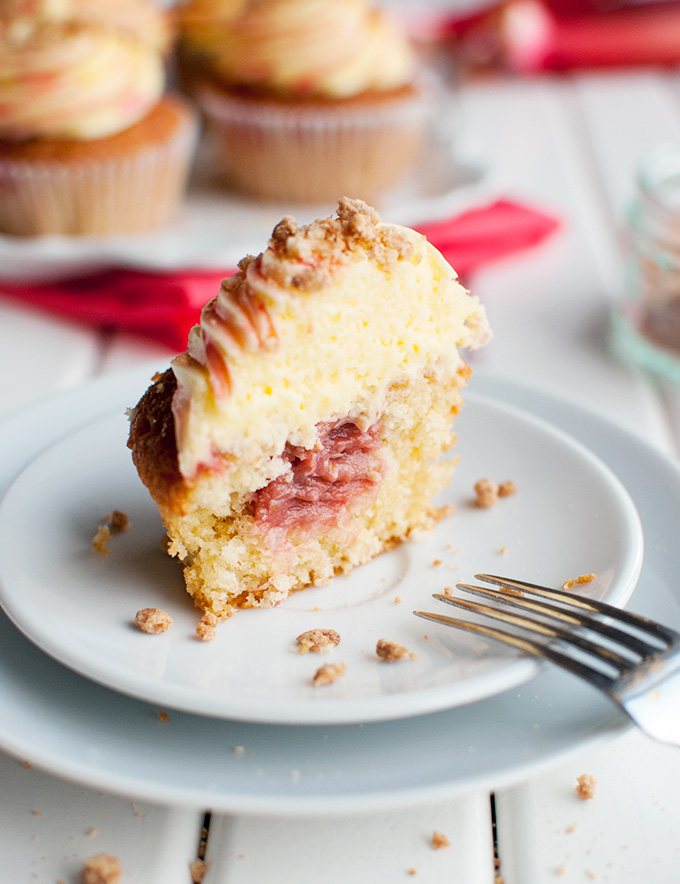 But oh, that custard buttercream! Confession: I had some leftover after I finished decorating the cupcakes, and I, um, just ate it. With a spoon. It’s THAT good! 😉

Or, if you need more rhubarb in your life, check out these awesome rhubarb recipes: 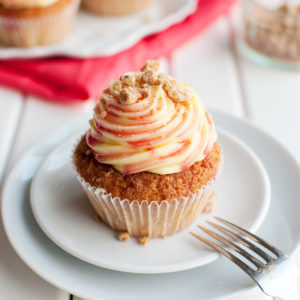 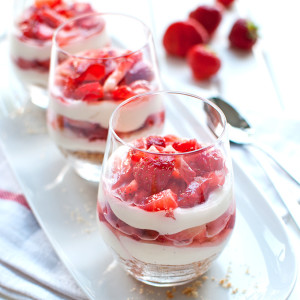