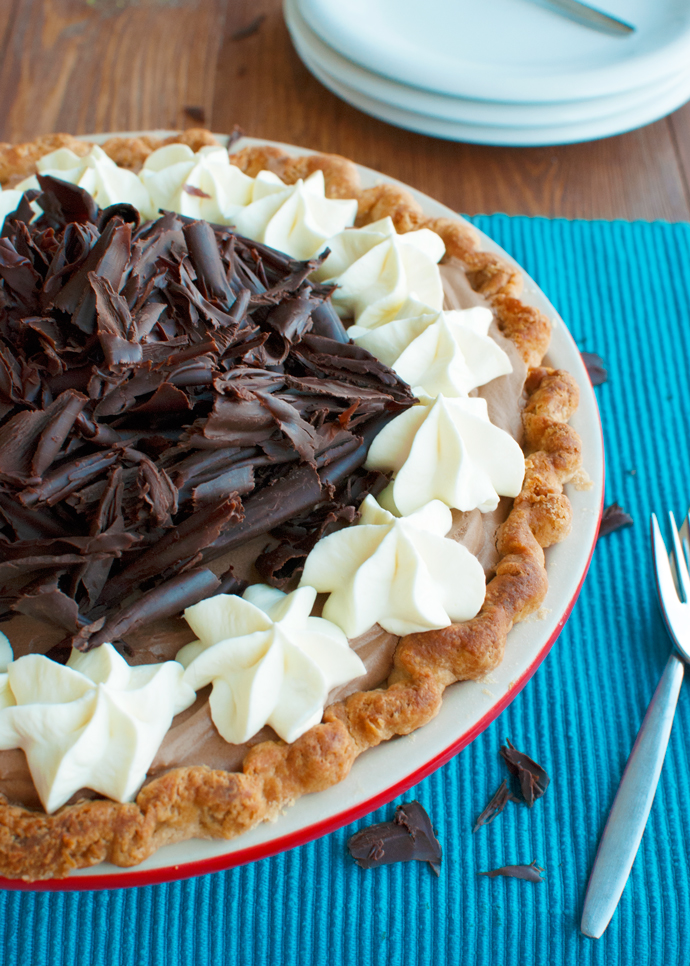 I have been wanting to make this pie for ages! Ever since I first read about it on the Pioneer Woman’s blog. I fell in love with it the moment I laid eyes on it. It looked so silky and luxurious. So tempting in a French way. I couldn’t wait to sink m teeth in it and I almost licked my computer screen!

Yet it took me – say – a good five years before I finally whipped it up.

I know what you’re thinking right now: why on Earth did it take me so long to make it? I honestly don’t have a clue. Though it might have something to do with the thousands of recipes that are still on my to-bake list. Or maybe it’s because, up until a few weeks ago, I had never made pie in my life. Or maybe it’s because I was busy. And I’m easily distracted. And quite forgetful. And a bit of an airhead sometimes.

So here it is!

French Silk Pie: silky, smooth, chocolatey and covered with homemade chocolate curls. Are you hungry yet? 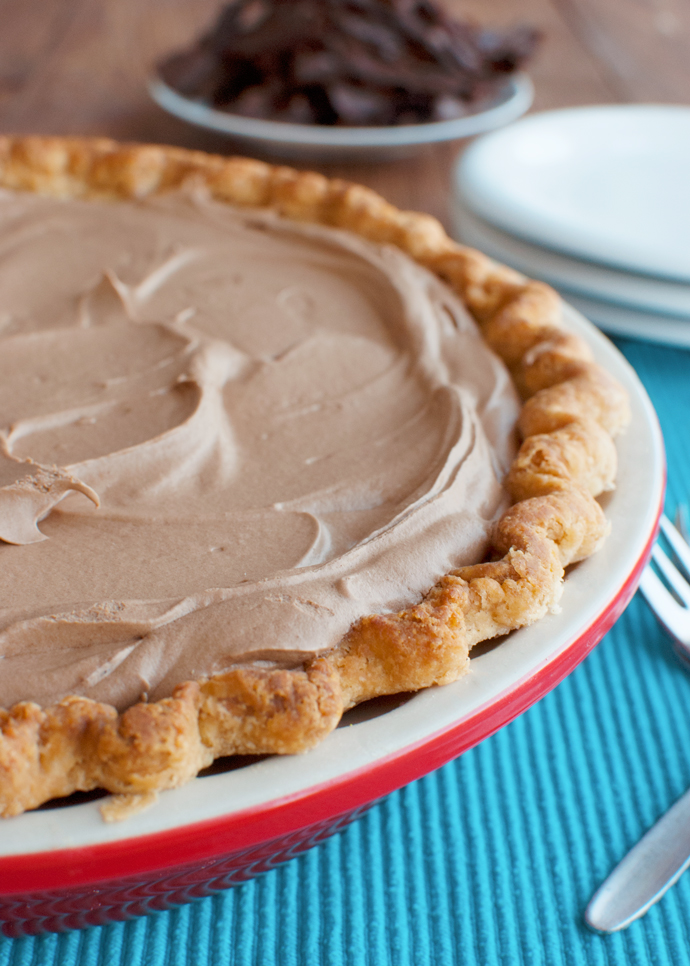 And see that crust? It’s an all-shortening pie crust. Because my last post was about all-shortening crusts remember? I thought it was appropriate. It’s not the same crust I tested in my last post though. It’s actually the Pioneer Woman’s recipe. Besides the obligatory shortening, flour, salt and water, her “Perfect Pie Crust“ (as she calls it) also contains a little vinegar and an egg.

Eggs are often added to pastry to make it more tender. They also affect the color of the final product because they promote the browning of the crust. Vinegar, because of its acidity, also helps for tenderness. Here’s how that works: for most sweet pastries, you don’t want a gluten structure to form. That’s why cookie dough, for example, is never kneaded and bread dough is. By kneading, a gluten structure is formed, which makes the dough elastic. Pie dough should not be kneaded for this reason; you don’t want it to become elastic and tough. Instead, you want it to flake. Acids – like lemon juice and vinegar – prevent a gluten structure from forming, therefore ensuring that the final pastry is tender. 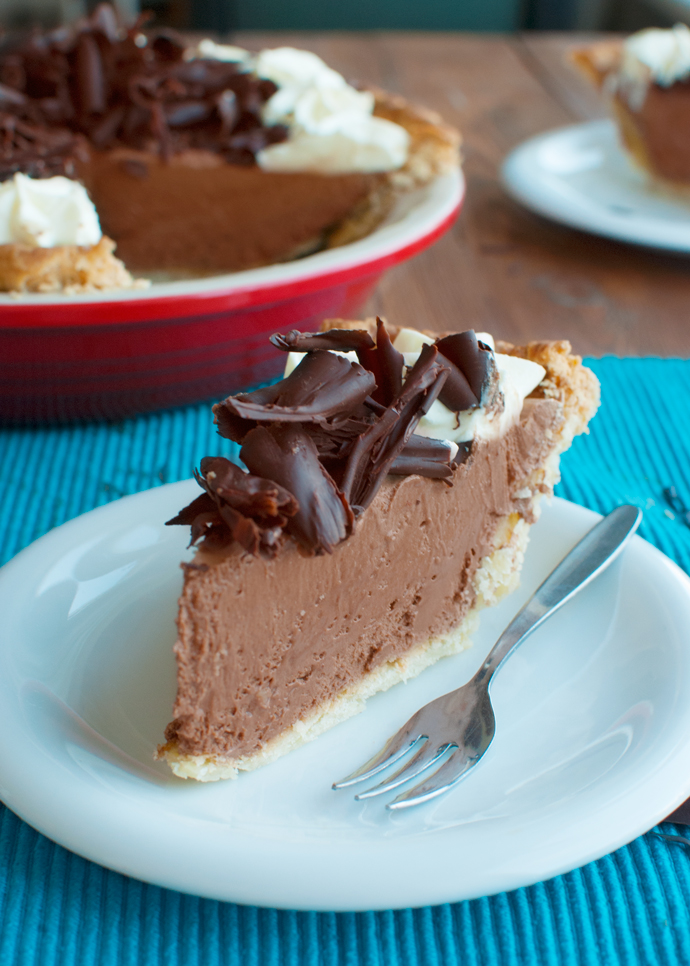 So what did I think of the crust?

Well, I have to admit that I didn’t taste the crust on its own. I only tasted it paired with the chocolate filling. Yet I noticed that this crust was less crumbly than the pie crust I tested in my last post. However, this can also be due to the fact that PW’s recipe has a higher fat-to-flour ratio than my recipe.

Flavorwise, don’t be afraid that the crust will have a sour taste because of the vinegar. You can’t taste the vinegar in the final product. I think this is actually a pretty good crust! 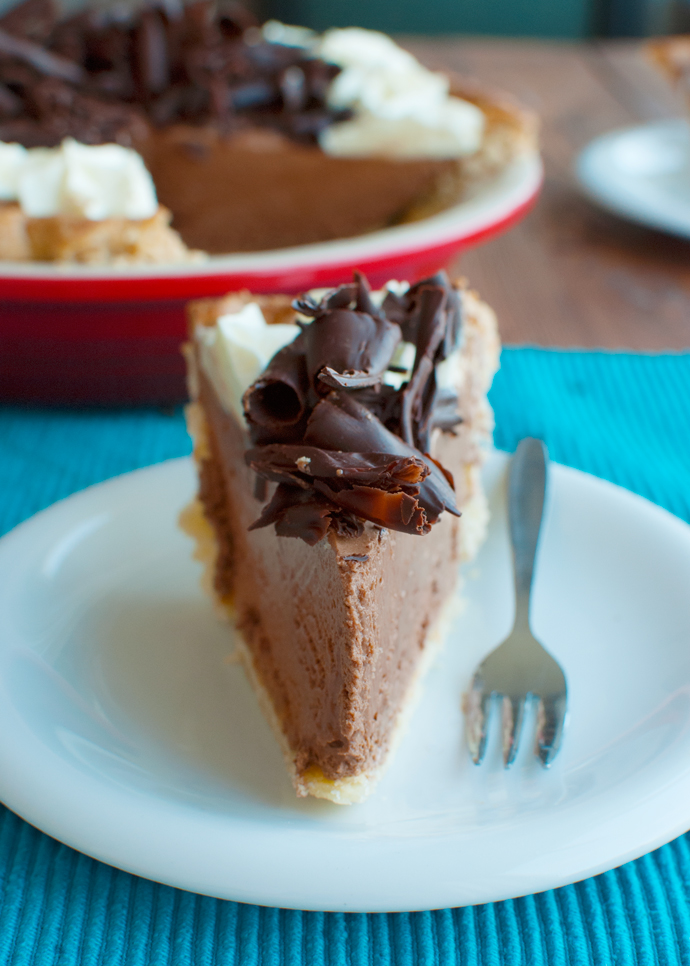 … let’s talk about the filling.

First note that this filling isn’t for everybody. Aka: not for old people, sick people, little kiddies and people with compromised immune systems. Or people with an irrational fear of salmonella. Yes, this pie contains raw eggs…

Again, the crust was great: it was flaky, tender and a breeze to whip up. But the filling was glorious. Smooth. Perfect. It totally, completely overshadowed the crust. TOTALLY!

Just look at it… 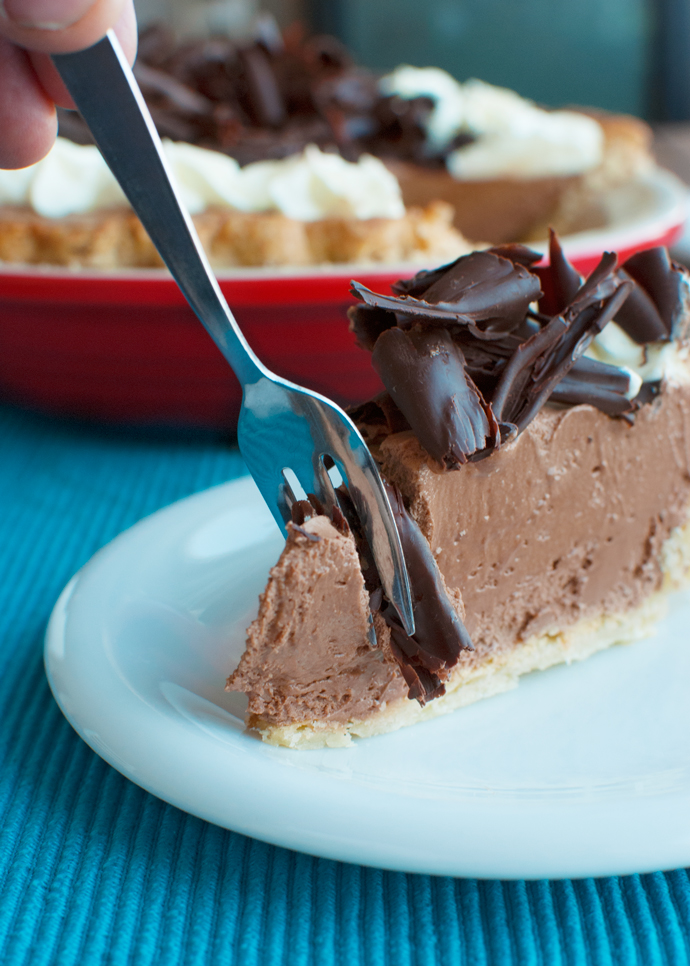 Print
Prep time
5 hours 30 mins
Cook time
25 mins
Total time
5 hours 55 mins
Author: Adapted from The Pioneer Woman
Serves: 12
Ingredients
For the crust:
For the filling:
For the chocolate curls:
For the whipped cream:
Instructions
Start with the crust:
Once the crust has cooled, proceed with the filling:
In the meantime, make the chocolate curls:
Nutrition Information
Serving size: 162g Calories: 746
3.2.1284 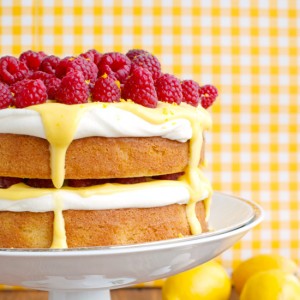 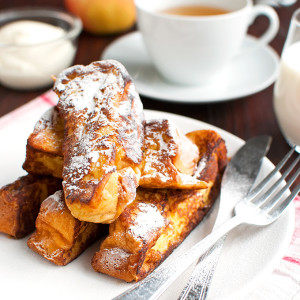