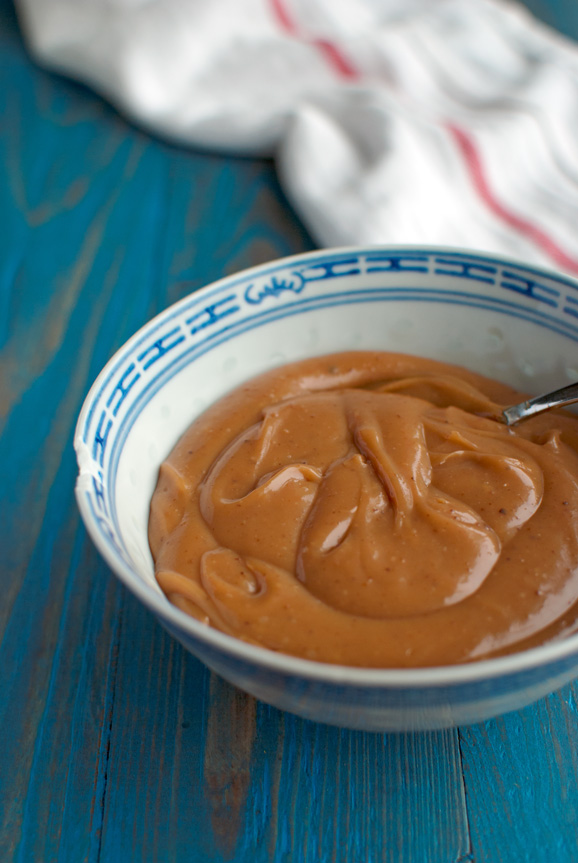 Oh yeah, after 3 weeks, 6 posts, 18 batches of would-be dulce de leche and about a zillion sugar highs it’s finally time to wrap up my ‘Making Dulce de Leche’ series! Not that I’m tired of dulce de leche or anything, but the series took me a little longer than I initially planned. Like, 2 weeks longer…

Anyway, I have learned so much from these series! Like how to make dulce de leche in a pressure cooker. In fact, before this series, I had never even used a pressure cooker! Plus, I also learned a lot about chemistry and physics. Like when will a heating can of sweetened condensed milk explode and when will it transform into something delicious! And what about that whole Maillard reaction? Pretty nerdy, right?

Like I said: I learned a lot. I now officially, even scientifically (!) know how not to make dulce de leche. Oh, and of course, I now also know which way of making dulce de leche is the absolute best!

In first place: boiling a can of sweetened, condensed milk in a pressure cooker. It’s (relatively) fast, foolproof and the resulting dulce de leche is gorgeously golden and utterly delicious. It’s exactly what dulce de leche should be like: thick and puddingy, with a beautiful complex flavor profile.

In second place: boiling sweetened, condensed milk in a closed can. This method is simple and the resulting dulce de leche is amazing, just like the dulce de leche made in a pressure cooker: thick, puddingy and golden.

Other methods that make beautiful, delicious dulce de leche are the other methods that require cooking sweetened, condensed milk in a water bath. Aka: the oven method, the open can method and the double boiler method. I’d say these three methods share the third place. Why? Well, these 5 methods yield the same results (delicious dulce de leche), but these 3 require a little more work. Even if it is only punching a hole in a can or stirring every now and then…

Well, I really didn’t like making dulce de leche in the microwave. The method is easy enough – just pour the contents of a can of sweetened, condensed milk in a big glass bowl and nuke it, stirring every 2 minutes, until it caramelizes – but the results were very disappointing. Not only was it incredibly messy – regardless of the fact that I used a 2½-liter (or about 2½-quart) bowl to make a mere cup of dulce de leche and the fact that I covered the bowl with plastic wrap – but the dulce de leche I ended up with had a crystallized feel to it and was very tough and chewy. As it cooled, it hardened to a solid, grainy mass…

Is it just me, or are you supposed to be able to mold little sleeping puppies out of dulce de leche? 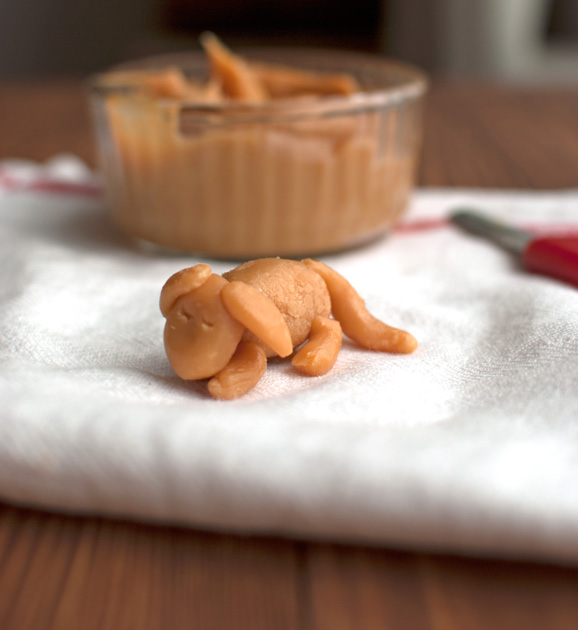 Anyway, it’s too bad that microwaving sweetened, condensed milk didn’t work out, because the microwave method only takes about 15 minutes in total. So, if this method would have worked, it would have been the fastest method by far!

Update: one of my readers (thanks HC!) told me that the dulce de leche crystallizes in the microwave because the water in it evaporates as you nuke it. Adding a teaspoon to a tablespoon of water each time you stir the dulce de leche ensures a smooth texture and enables you to cook it to a deep golden brown!

But as I experimented with different recipes, I again and again found that rushing the process of caramelizing sweetened, condensed milk is not a good idea.

The pan method also sounded very promising to me at first. The idea is that you just pour the contents of a can of sweetened, condensed milk in a saucepan and heat and stir it until it caramelizes. Supposedly, this would give you a beautiful dulce de leche in under 10 minutes. Sounds too good to be true? Well, that’s because it is. This method doesn’t work. At least, it didn’t for me. Because the water in the milk evaporates as it cooks, the resulting ‘dulce de leche’ will not only be incredibly sticky and tough, it – like the microwave dulce de leche – also hardens as it cools.

Soooo not what you want in dulce de leche. Again: it should be puddingy!

The next recipe I tried was not a proper dulce de leche recipe. It was a shortcut I once saw on Masterchef Australia. In the 30th episode of season 3 (I just checked, I’m not a freak who knows these things) one of the chefs (Georgie) makes a Caramel Ripple Ice Cream similar to the one I made a few posts ago. He just didn’t add the nuts. Anyway, in the show, he starts off with a saucepan, to which he adds a can of sweetened, condensed milk and a little golden syrup. He then cooks this mixture for 6 minutes, stirring continuously. Next, he pours in some whipping cream and allows the sauce to cook for another 4 minutes.

I tried this and sure enough I did end up with a saucy substance, but it was far from pretty. In fact, it had a lot of specks of burned milk in it. Besides, to me it tasted more like regular caramel sauce, made with sugar and cream. Not like dulce de leche.

Again: not what you want in dulce de leche! 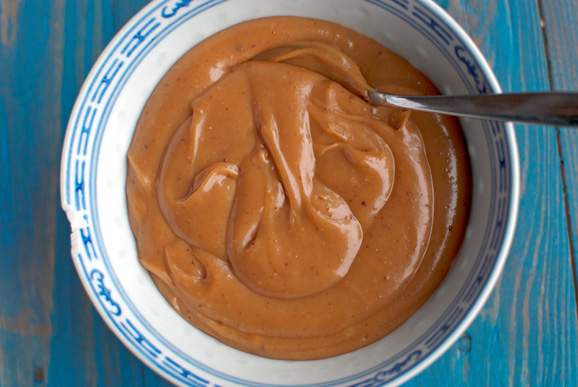 It’s just not worth it!

I tried a number of such recipes, and each of them was a massive fail. First, I tried combining sugar, milk and baking soda in a large Dutch oven and cooking it until the milk reduces and the mixture browns. It did brown. To the point of burning. But did it thicken? No… Not in the least… It just turned into this blackish, grainy sludge that wasn’t pleasant in taste or texture. I tried to adapt the recipe, hoping that if I added the baking soda – which helps the mixture to brown – later on, after the sweetened milk had thickened, that it would turn out okay, but it didn’t. It was still horrible…

As were the results when I tried making dulce de leche by cooking a mixture of sweetened, condensed milk, evaporated milk and corn syrup. This mixture did thicken. Quite considerably, too. To the point at which I couldn’t get my spoon out after it had cooled. 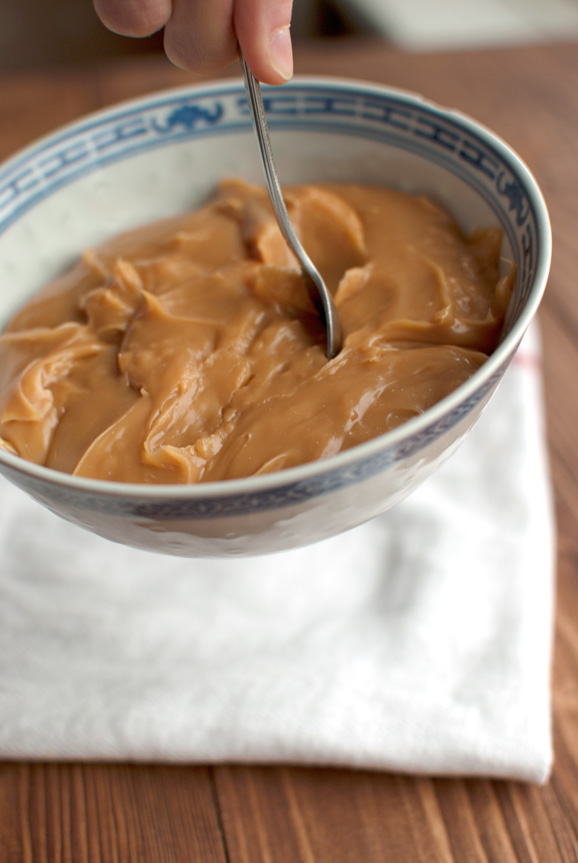 I also wasn’t too happy with the color of the finished product. You can’t really tell from the picture, bu it was too pale. Not the kind of deep, dark golden that indicates that the dulce de leche has a gorgeous, complex flavor. I thought about cooking the mixture a little longer to deepen the color (and flavor), but I quickly realized that all that would do is turn the ‘dulce de leche’ into something to cut diamonds with…

So finally, I attempted to make dulce de leche from scratch in a water bath. Which took me forever! Again, it all sounds great in theory – just cook milk and sugar in a water bath until the milk reduces and browns – but after 7 hours of cooking (!!!) the milk still hadn’t browned. It had reduced, yes, but it just looked like sweetened, condensed milk to me. I started wondering why I was doing this again. I mean, why cook something for 7 hours, only to end up with the stuff you can buy in a can?

It just doesn’t make any sense…. 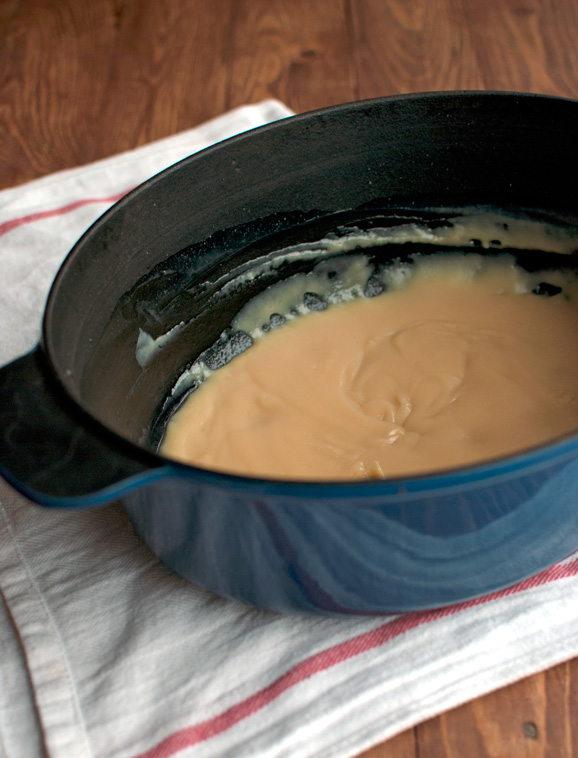 It certainly looked nothing like dulce de leche! Besides, it had a grainy texture and lacked that velvety smooth, pudding-like consistency. I couldn’t do anything with it than throwing it in the bin.

Luckily I had a can of proper dulce de leche in my fridge, so I quickly got myself a spoon – because I’m sophisticated – snuggled into the couch and helped myself to spoonful after spoonful of the good stuff in all its glory and abandoned the whole idea of making dulce de leche from scratch.

There is only so much patience I can muster…

Anyway, I hope that you enjoyed this series and that this post – like the other posts – has been helpful! Now go make some real dulce de leche! 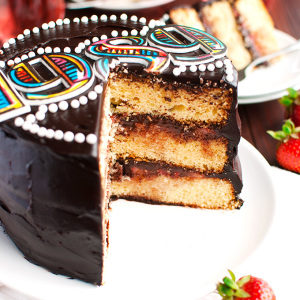 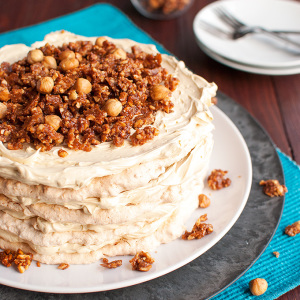